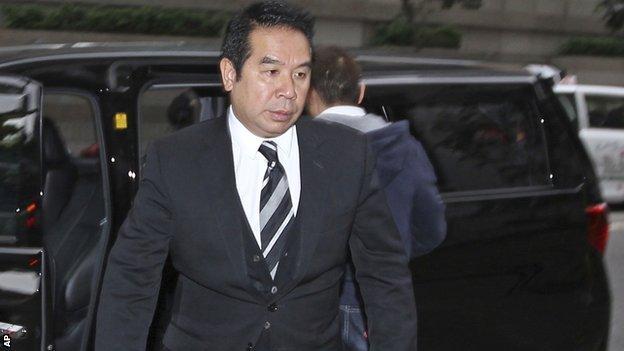 For those critics of English football's fit and proper person's test, the case of Carson Yeung is the best example yet of a system that is failing the game.

Convicted of five counts of money laundering, Yeung was sentenced on Friday to six years in a Hong Kong jail.

Perhaps anticipating his conviction, the 54-year-old former hairdresser cut his official ties at the club knowing full well he would be ordered to do so by the Football League and the Hong Kong Stock Exchange (where BIHL's shares are listed).

The Football League's owners' and directors' test (to give it its proper name) was introduced more than 10 years ago and disqualifies individuals convicted of a dishonest act or corruption from serving as a director or official of one of their member clubs.

The league might point to Yeung's self sacrifice as an example of its regulations working.

"His was a rags to riches and, now, back to rags story.

"Carson Yeung's rise from humble hairdresser to wealthy owner of a British football club has attracted much media attention.

"The international press pack bore witness to his fall from grace at the end of a three-year legal case.

"His legal team has declined to say whether there will be an appeal. This has been a closely watched case, coming just two years after the city introduced new laws against money laundering and terrorist financing.

"It is still unclear exactly how the sentence will affect Birmingham City."

But many people will rightly ask how he was able to take a controlling interest in Birmingham in the first place.

And they will want to know how and why he is still able to own such a significant stake in the club - now 15% - when he is heading to prison.

He had initially purchased 30% two years earlier but had repeatedly struggled to come up with the rest of the money needed to buy out David Sullivan and David Gold - now owners of West Ham.

That in itself should have sounded alarm bells. As should the allegations of share ramping - the practice of artificially inflating the value of shares in which an individual has a direct interest - which were made by a Hong Kong business magazine around the time of his bid for Birmingham.

But by the time he got the money together, Birmingham were in the Premier League and he was cleared under the organisation's owners and directors test to take his place among the growing list of foreign majority shareholders.

The problem for both the Premier and Football League is that for all the concerns and allegations about Yeung's past (there were plenty of claims swirling around that he was in some way linked to criminal gangs in Macau) there was no hard evidence and no convictions.

The test in place for both leagues has to be based on objective criteria and must comply with UK law. The Premier League chief executive Richard Scudamore has grown tired of telling journalists the organisation cannot just introduce a "we-don't-like-the-cut-of-your-jib test".

He knows that barring wealthy businessmen from buying football clubs based on suspicion and allegations is a recipe for costly legal action. Besides why should the bar for buying a football club be set higher than, say, a supermarket chain or a bank?

Perhaps a change to the law might empower the leagues or the Football Association to introduce rules which are more discretionary, empowering them to be more selective about the type of people who end up in charge of our clubs.

But this government has no appetite for meddling with football and it would run counter to its wider policy on business - namely to encourage foreign entrepreneurs to invest in UK PLC.

But even if English football can't get around UK law, the leagues could do more.

For example, the current tests rely on directors "self certifying" their suitability. There is something mildly comic about a rule which asks potential fraudsters to tell the game's ruling authorities that they are straight.

Only when the leagues set aside sufficient resources to carry out their own proper and thorough checks can fans be entirely confident that the people claiming to be a club's latest good custodians are the real deal.

And surely given all the money coming into the Premier League, greater sums should be set aside for protecting the integrity of the member clubs.

Further comfort could be provided by a tweak to the rules requiring not only shareholders with more than 10% to reveal themselves, but also those providing loans to clubs.

At the moment, the leagues are more concerned with the question of whether clubs will have sufficient funds to see out each season.

They don't ask tough questions about where the increasing number of directors' loans are really coming from. They say they know, but they aren't currently published. Greater transparency on this score may give greater confidence.

But the only real long-term solution to all this lies with the success or failure of financial fair play.

For, as long as clubs are unable to operate on a self-sustaining basis, then they will continue to rely on wealthy benefactors to bail them out.

One only has to look at the vast losses announced this week by clubs in the Championship - QPR,Nottingham Forest and Leicester - to realise that the financial risks being taken by teams to get into the Premier League have become too perilous to continue.

For many it is not a question of closing the gap, it's a matter of survival. And that gap is only going to get bigger as the Premier League's TV deals grow.

Until the bigger problem of sustainability is solved, characters such as Carson Yeung will be free to take a gamble on some of our greatest footballing institutions.