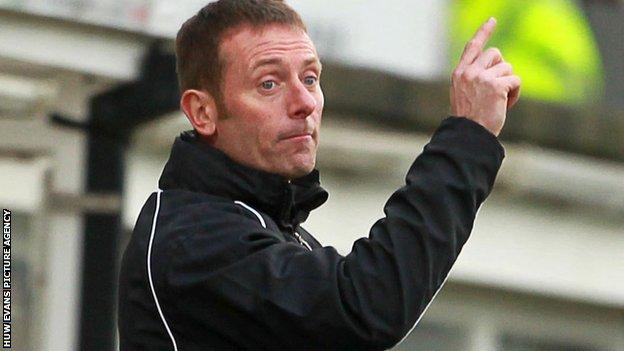 Caretaker manager Billy Barr believes he has the support of Wrexham players in his bid to become the club's permanent boss.

Barr has been in temporary charge since Andy Morrell's departure and has publically said he wants the job full-time.

Defender Neil Ashton had said he was keen for the former Carlisle defender to apply for the vacant position.

"I do feel that I've got the support," Barr said.

"The response that's been since Andy left ... they've come out and put in performances not just on the training pitch but last Saturday at Hereford.

"It's nice for Ashy to say that and I would love to be the manager. I really, really would.

"All we're doing at the moment is making sure they work hard and get them organised and structured and hopefully that will show off [against Kidderminster]."

Former Wrexham defender Frank Sinclair has said caretaker boss Barr is in "pole position" to get the job on a permanent basis.

Sinclair, now in charge of Conference North side Colwyn Bay, has ruled himself out of the running for the job.

On Saturday Wrexham host Kidderminster Harriers, a team they beat over two-legs to reach last season's play-off final at Wembley.

The Dragons are currently eight points off the play-offs but Barr has not given up on a top five place in the Conference.

"We will keep going and going and we're just looking at one game at a time and trying to get three points from each and every game," Barr said.

Jay Harris and Brett Ormerod have been included in the squad for the game against Kidderminster after training during the week.

But midfielder Joe Clarke will miss the game after suffering a facial injury.

"Joe had a nasty accident at the weekend. He ended up tripping on a kerb and smashing his face," Barr said.

"He's got stitches in two places, one on his top lip and one on the bridge of his nose. Medically he's out for the weekend."

Meanwhile winger Theo Bailey-Jones has joined Colwyn Bay on loan until the end of the season.