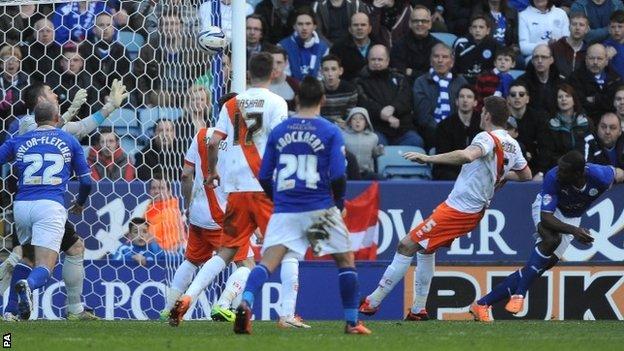 A stirring second-half display helped leaders Leicester City fight back to see off Blackpool and stretch their unbeaten Championship run to 16 games.

The Foxes dominated the first period, only to trail to David Goodwillie's close-range effort.

But Riyad Mahrez equalised with a sweet long-range shot and then teed up the home side's second with a fine cross which was headed in by Wes Morgan.

And a late strike by substitute Kevin Phillips sealed a fourth straight win.

Burnley's home victory over troubled Leeds United means City maintain their seven-point lead at the top of the table.

Leicester have the best home record in the Championship this season. Their only league defeat at home was 2-0 to Nottingham Forest in November.

But they now look almost certain to gain automatic promotion as they are 17 points clear of third-placed Derby County, with the Rams having played a game more.

Blackpool, whose midweek win over Millwall was their first success in 19 matches in all competitions, were second best throughout and were lucky not to fall behind as the hosts created a flurry of early chances.

Mahrez fired a effort just wide after a Matty James shot had been blocked and winger Anthony Knockaert put an effort into the side-netting after good work by Jeff Schlupp.

Jamie Vardy also saw a header go just wide and David Nugent was off target with an angled shot.

The pressure remained relentless. Vardy had a goal disallowed for offside after running through and the impressive Mahrez tested goalkeeper Matt Gilks after a fine solo run.

But it was Blackpool who squandered the best chance of the opening half-hour, Neal Bishop sending a free header wide from Andy Halliday's corner.

Vardy then sent a volley - and another shot - wide for Leicester and the visitors made them pay when a long throw caused confusion and Goodwillie netted after a poor attempted punched clearance from goalkeeper Kasper Schmeichel.

The Foxes piled forward after the interval and it was no surprise when Mahrez made it 1-1 with a stunning, swerving strike from 20 yards

Gilks then did superbly to keep out Nugent's header after more good approach play from Mahrez, while substitute Gary Taylor-Fletcher almost scored against his former side with a shot that scraped a post.

But the Foxes were not to be denied and Mahrez produced another superb cross in the 82nd minute which Morgan headed home then, three minutes from time, Phillips knocked a Danny Drinkwater cross into the roof of the net to seal a deserved win.

"We played against a side who didn't try to win the game and we had to show a lot of patience. I would have done the same if I had been them and it made it a potentially difficult day for us.

"The key thing today was that the players showed a belief in how we play and trusted each other to play with our methods and we got the result we wanted. But it was more difficult than in previous games because we didn't get that early goal and, as we have done on a few occasions, had to win from a losing position.

"But it was a great result for us. It's another game ticked off and another win. Every time we do that it makes it more difficult for sides around us. We showed an awful lot of quality today. The players have got a lot of belief in themselves and each other."

"Leicester are a good team but I set out a gameplan that had worked for 60 minutes. Then they scored a great goal and we felt sorry for ourselves and fell away - and in the end Leicester deserved the win.

"That's been the problem for us all season. We had a good result against Millwall in midweek, but it had been a long time coming. And we did well again for 60 minutes today until the lad (Mahrez) fires a great goal and after that we sat far too deep and invited Leicester on to us.

"You have got to deal with pressure in professional football. I have always been able to deal with it and I would like to think the boys in the dressing room can. We have been through a hard time since I took over.

"It is getting closer and closer to the end of the season and we have got to be able to handle the pressure because we are still a million miles away from being safe."