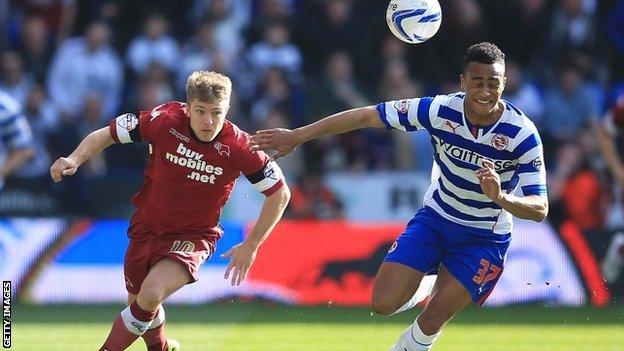 Derby's hopes of automatic Championship promotion suffered a setback when they were held to a goalless draw by Reading at the Madejski Stadium.

It was the Rams' fourth match without a win, while Reading's play-off chances were dented by their poor home form.

In a scrappy contest, Derby's Craig Forsyth scooped over from close range before Reading substitute Adam Le Fondre miscued from a few yards out.

Usually such a free-scoring side, Steve McClaren's men have drawn a blank in their last four league games.

Reading's failure to win a fourth successive home game is at least tempered by their 4-2 win at Leeds last Tuesday, but they slipped out of the play-off places after Wigan's win at Ipswich.

Energetic Derby striker Jamie Ward did his best to find a breakthrough, finding Forsyth with a clever near-post header, but he was let down by the Scot's finishing.

After threatening only briefly in the first half, Reading appeared the more reinvigorated after the interval, with Jobi McAnuff drawing a save from Lee Grant and a Hope Akpan effort deflecting off Kaspars Gorkss before nestling in the Derby goalkeeper's grasp.

Le Fondre had the hosts' best opportunity, and was fortunate that Derby substitute Patrick Bamford wasted two decent chances as the game petered out into an inevitable draw.

Derby boss Steve McClaren: "We controlled the game and the performance was great from the players.

"If we hadn't been scoring all season, I'd be more concerned, but we have been.

"We're making chances but sometimes in a season you go through a barren patch. We've just got to keep playing as we're doing."

Reading manager Nigel Adkins on slipping out of the play-offs places: "I'm not too worried about that. Our confidence is still high and the players have been top drawer for me.

"There's a lot of positivity about the place. We've been the course and distance before and it's a very exciting time here. We're really looking forward to the last 10 games.