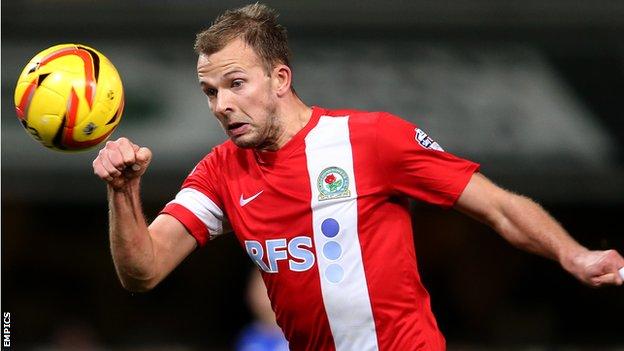 Striker Jordan Rhodes scored a hat-trick on his return to former club Huddersfield as Blackburn ended a three-match losing run.

The Scot put the visitors ahead inside four minutes after latching on to Rudy Gestede's flick on, before Adam Hammill equalised.

But a second-half Rhodes header and a Craig Conway shot put Rovers in charge.

Nahki Wells made it 3-2 but Rhodes then grabbed his 20th of the season to seal the win after racing clear.

Rhodes, 24, left Huddersfield in August 2012 for a club record £8m to become Blackburn's most expensive player.

And after three prolific seasons at the Terriers, the Scottish international has been no less impressive for Rovers, who banished memories of recent defeats by Bolton, Burnley and Bournemouth.

Rovers boss Gary Bowyer held crisis talks with his players following those results and it clearly had an effect as his side gave themselves an outside chance of reaching the play-offs.

Blackburn were even able to shrug off injuries to Jason Lowe and Gestede on the road to victory, with the latter rushed to hospital as a precaution after being carried off in a head brace following a clash of heads with Town captain Peter Clarke.

Those worries aside, it was a day that belonged to Rhodes, who performed muted celebrations after his goals, perhaps out of respect for his former team.

After his early strike and Hammill's reply, he headed in off a post from Conway's cross after good work by veteran David Dunn.

Blackburn went 3-1 up on 65 minutes thanks to a blunder from goalkeeper Alex Smithies, who let a Conway shot slip through his hands.

Wells then ended a nine-game goal drought with a low, drilled shot.

The hosts could have equalised again when Danny Ward missed an open goal but Rhodes pounced on a slip by Adam Clayton to have the final say.

Blackburn Rovers boss Gary Bowyer on Jordan Rhodes: "It was an outstanding display of finishing and he has been doing it for a number of years now.

"It was special for him coming back to his old club with all his family and friends here. His finishing was different class.

"We have had a sticky patch and the character and spirit of the players was challenged coming into this game but we have responded well."

Huddersfield manager Mark Robins: "We have gifted them the goals.

"Jordan Rhodes has been on a lean spell but we seem to have forgotten he is no longer a team-mate. I am not being derisory to him because he is a great finisher but we have given him the goals.

"Everybody is saying we are safe but we have to keep on playing and make sure we don't slip up. We talk about wanting to get to the next level but we have to consolidate our position."