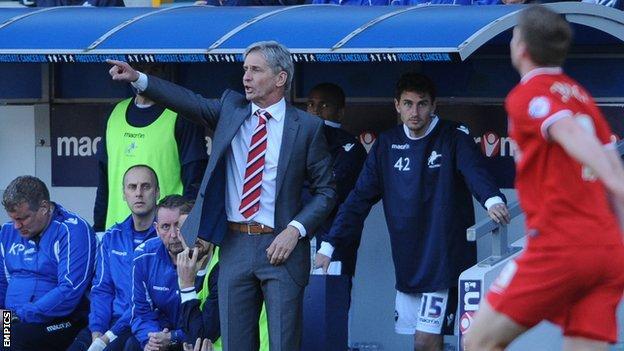 Charlton moved off the bottom of the Championship on goal difference after a draw at fellow strugglers Millwall.

Fred Onyedinma headed an early Millwall chance wide, while Charlton's Callum Harriott had an effort saved by David Forde when one-on-one with the keeper.

Harriott also sent a volley wide before he set up Reza Ghoochannejhad, who shot straight at Forde.

Stefan Maierhofer headed over for Millwall, for who Owen Garvan had a late free-kick tipped over.

The home side applied all the late pressure but Charlton held on for a point in their second goalless draw since Jose Riga took over as their manager.

The Addicks are now three points adrift of the Lions with three games in hand on their rivals, who are just one place above the relegation zone.

Millwall lacked a cutting edge in the final third as their winless run at the Den stretched to six games.

"I thought it was going to be a fairytale, young Fred (Onyedinma) when he whipped his head round that I thought 'here we go, go on son'. Unfortunately it went the wrong side.

"And they've come in and they're probably happier with it than I am. But I thought the crowd were excellent and I thought we kept trying.

"I thought there was a bit of nerves out there. We didn't create as many chances as we can. And that's very tough when you end up in a situation like we are in. You have got to be brave to play the way I want to. Hopefully I have simplified it for them."

"My thought is that we physically were still feeling the effects of the game that we had at home on Wednesday (against Huddersfield).

"In the first half we didn't have a lot of chances but we had a lot of corners. In some moments we created some chances but the finishing was not there. I have seen my team all game in a good defensive collaboration. It was not easy all of the time but we tried to create some opportunities.

"The result was logical, though of course I would prefer to win. Certainly for me our game in the week had an effect. I am not disappointed with the result and I am happy with the way that players showed that they would take something from Millwall."