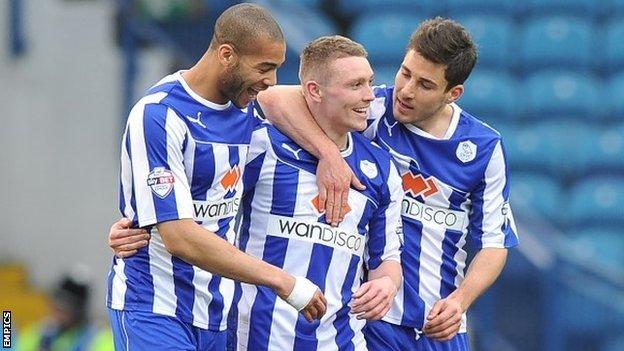 The Owls took the lead when Lavery converted Kieran Lee's cross, then three minutes later Leon Best tapped in their second from a corner.

Will Packwood diverted a Jeremy Helan cross into his own net to make it 3-0, before Chris Maguire teed up Lavery to curl home his second.

Lee Novak prodded in a late consolation for the visitors.

But Wednesday's win was never in doubt and, after taking only one point from their last four games, Birmingham remain perched precariously above the Championship relegation zone.

The home side dominated from the start and Sam Hutchinson and Maguire both went close before Lavery broke the deadlock after 17 minutes.

Things quickly got worse for Lee Clark's side when Best made it 2-0 after Maguire flicked on Lee's corner.

After half-time, Packwood's own goal put the points beyond Birmingham, and the impressive Maguire set up Lavery for Wednesday's fourth goal.

Birmingham had been limited to long-range efforts from Emyr Huws until 10 minutes from time, when Novak converted Chris Burke's cross.

"I said to the players before they went out that they needed to get their tackles in, crosses in, shots in, and that's exactly what they did.

"I don't think Birmingham threatened all game. They got one back, which was a little disappointing, but I just wish it could have been 4-0 for the sake of the players."

"I've got no complaints about the result because I thought Stuart's side were excellent, whereas we were just disappointing.

"I'm disappointed, frustrated, and worried. There are so many adjectives to describe how I'm feeling, but all in all I think that our efforts from Wednesday night [a 3-3 draw with Burnley] just took its toll on us.

"I'm nervous as it is because we are too close to the drop for my liking. It's not that bad at this moment in time but we just need to look after ourselves a little better."