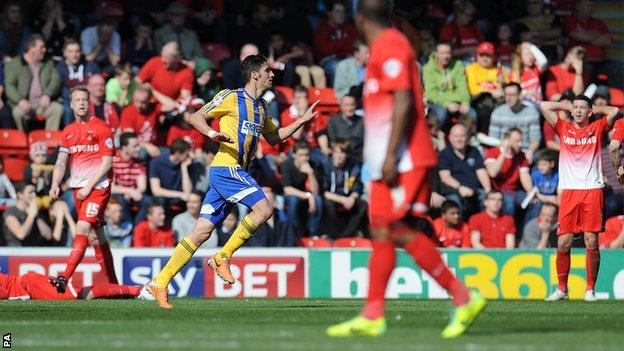 Brentford won at Leyton Orient to go second in League One and boost their hopes of automatic promotion.

Marcello Trotta scored the only goal in first-half stoppage time with a powerful low drive from 20 yards.

James Tarkowski was sent off for two yellow cards but the visitors survived for 41 minutes with 10 men.

Brentford are a point behind League One leaders Wolves, who drew 0-0 with Shrewsbury, while Orient drop to third, two points behind the Bees.

The hosts enjoyed long spells of pressure in the first half, with striker David Mooney chipping over from the edge of the box and Dean Cox fizzing a shot wide from 25 yards.

Marcello Trotta has scored in 12 games for Brentford this season. The Bees have won 11 of them, and drew the other at Shrewsbury.

Brentford's task was made more difficult four minutes into the second half when centre-back Tarkowski, one of three players booked in a feisty first period, saw red after lunging in on Romain Vincelot.

But Orient, who have played two games more than their London rivals, struggled to make the advantage of the extra man count.

And they were lucky to escape further damage at the other end when Donaldson's goal-bound header ricocheted behind off his own player and on-loan winger Alan Judge struck a post late on.

"The effort and determination was of a high standard and that culminated in a strong first-half performance.

"We were unfortunate to go in at half-time 1-0 down. We should have closed it down better.

"We've come from behind before and I fully expected to put them under pressure. How we've not scored today, I don't know.

"It's a good group, I believe in them and we'll fight for as many points as we can."

"There was a lot at stake and both teams realised that. It was a big derby and second versus third.

"I'm delighted with the way the boys reacted to it. We tried to avoid being drawn into a melee and the key for us was focusing on what we do well.

"The players have learned from last year's disappointment and hopefully we're in good shape to keep pushing forward."