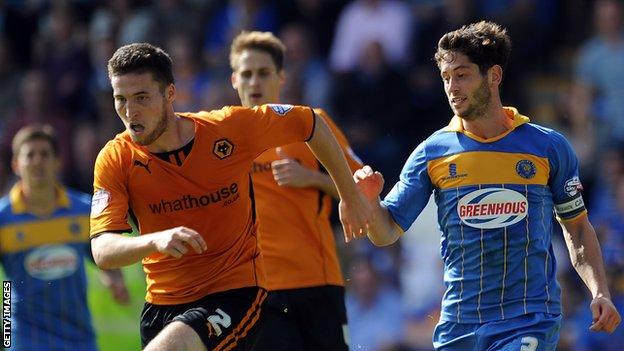 League One leaders Wolves' club-record run of wins was ended by a goalless draw with struggling Shrewsbury Town.

Wolves, who had won their last nine, made most of the first-half running, with James Henry forcing a smart save.

After the break, Connor Goldson headed just wide for Shrewsbury, while nobody could connect to a number of dangerous Bakary Sako crosses for Wolves.

The hosts came agonisingly close to a late winner, but Matt Doherty's header was cleared by a Shrewsbury defender.

The visitors then immediately broke but Tom Eaves could only shoot straight into the arms of Carl Ikeme.

A solid base for Wolves

Despite their run of victories coming to an end, Wolves are a point ahead of Brentford - who beat third-placed Leyton Orient on Saturday - at the top of the table, while the draw leaves Shrewsbury four points adrift of safety.

They came close to opening the deadlock against the run of play in the first half when Joe Jacobson headed over from a corner and Sam Foley fired high and wide.

Most of Wolves' play came from wide areas, with neither Michael Jacobs or Ethan Ebanks-Landell able to get on the end of a teasing Henry cross.

Ikeme made a great save after the break, keeping out a curling effort from Miles Storey.

Wolves dominated the final 30 minutes, with winger Sako at the heart of most of their play, firing across goal for substitute Leon Clarke but the former Coventry front man could not reach it.

"Our finishing wasn't of our usual standard. We've been pretty ruthless of late. We had a lot of shots and didn't hit the target anywhere near enough.

"It's not necessarily an easy situation to continually keep winning. When we had the opportunities and the chances, it was very difficult.

"Overall we're disappointed. We always want to win and want to win your home games. We take our point, we move on, we try to get back to our clinical best."

"In the first half we did really well, and once we got to grips with the game and their system, we had some good spells and good counter attacks.

"We started running out of steam in the second half, and we rode our luck probably. But we've got to recover now. We've got a massive game on Tuesday."