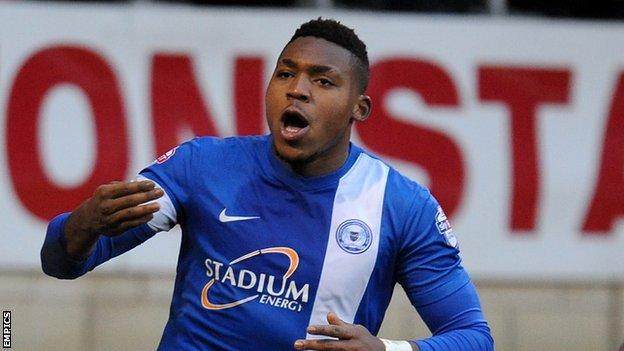 Dons keeper David Martin saved from Assombalonga and Nicky Ajose, with Sanmi Odelusi testing Bobby Olejnik at the other end in a goalless first half.

After the break, Assombalonga tucked in Michael Bostwick's cross and then converted from the spot after George Baldock fouled Conor Washington.

The brace takes the former Watford striker's tally to 27 for the season.

The home side, who could only name six substitutes, were looking for a third consecutive win to put pressure on sixth-placed Posh, but Olejnik's save from Dean Lewington's effort was as close as they came to a late rally.

Instead, Darren Ferguson's men pulled six points clear of MK with a game in hand.

"We understand how difficult it was going to be today, but there was very few opportunities in the first half.

"(On the penalty) I've seen a frame by frame. It's definitely not a penalty.

"We've been beaten, we've got to accept that. They'll be a lot of people, including myself, who will be very disappointed leaving today.

"I don't think the players attitude can be questioned today. I thought everyone put a right effort in, and so did the fans."

Shots on Target
Home4
Away11