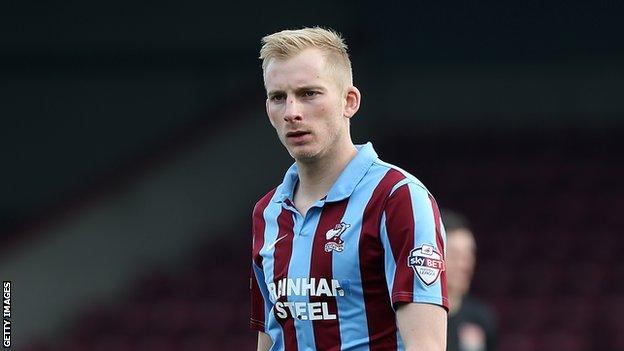 Dave Syers's 10th goal of the season and a late own goal by Jake Cole saw second-placed Scunthorpe win a close game against Plymouth.

The best chance of an even first half fell to the visitors' Gary McSheffrey, who scuffed his chipped shot wide.

Argyle's Lewis Alessandra hit the post twice in the second period before Syers slid in to put the Iron in front.

In injury-time, Hakeeb Adelakun's shot cannoned back off the post and went in off unfortunate goalkeeper Cole.

Scunthorpe have now won 10 and drawn 11 since their last defeat in November at home to Grimsby.

The result sees Scunthorpe extend their new club-record of successive games without defeat to 21 matches.

Plymouth, themselves chasing a play-off place, gave the visitors a tough game at Home Park, Conor Hourihane forcing a fine finger-tip save from Sam Slocombe in the first half after a good lay-off from Reuben Reid.

They were unlucky not to score after the break, but Scunthorpe eventually found a way through after good work from Paul Hayes, who found midfielder Syers inside the six-yard box to prod home right-footed, and the points were sealed in fortuitous circumstances late on.

Before the game, Argyle announced that defender Guy Branston has been released from his contract with immediate effect.

The 35-year-old has been suffering with an ankle injury.

"It's a big win, they're all big wins now. It was well-deserved today and we played some outstanding football.

"It's so important that the players can manage the game out there. We were very brave out there today too, we were the away team and were playing out from the back.

"To get a clean sheet today against a team who are in fantastic form, who've won four out five, is a great achievement."