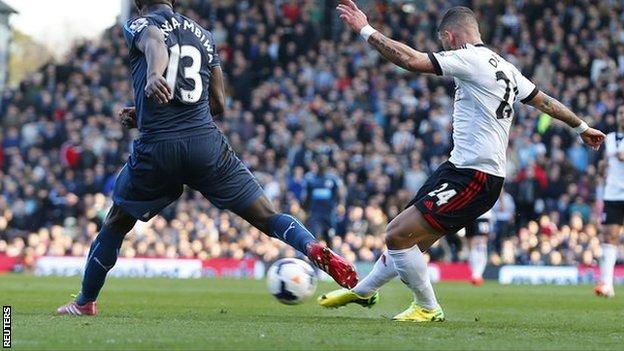 Fulham kept their hopes of top-flight survival alive after Ashkan Dejagah scored the winner against Newcastle.

Johnny Heitinga almost put the home side in front when his shot hit the underside of the crossbar and bounced clear, with replays showing it was only millimetres from crossing the line.

But, after Magpies striker Papiss Cisse had a shot saved by David Stockdale when clean through, Dejagah struck.

He cut in from the left and sent in a shot which went under keeper Tim Krul.

The three points might have been dramatically snatched from Fulham's grasp in the final moments of the game when Krul, up for a Newcastle corner, had an effort that hit the arm of Heitinga in the box.

However, referee Howard Webb decided against awarding a penalty, much to the relief of the home side as they registered their first win in 10 league games.

The victory was also Felix Magath's first in his four games since taking charge but keeps Fulham, who are bottom of the Premier League, four points from safety.

Newcastle were without manager Alan Pardew as he served the first of a three-game stadium ban for headbutting Hull's David Meyler in their last game, and his side have now lost five times in succession at Craven Cottage.

"Felix Magath celebrates his first victory in charge for Fulham but Newcastle felt they should have had a late penalty. A big win for Fulham but will it be enough in the long run, I don't know?"

Pardew was watching the game from his hotel room and keeping in touch with assistant John Carver by mobile phone.

Despite Magath saying his players had not quite grasped the seriousness of their position since his recent arrival, their was a sense of urgency about the home team's play from the start.

Fulham created the first chance when a left-foot curler from Lewis Holtby was palmed away by Krul, before Cottagers goalkeeper David Stockdale dived low to his right to keep out a stabbed Cisse effort at the other end.

After the break, Fulham exerted the greater pressure and were only denied a goal by the smallest of margins.

Impressive young Fulham forward Cauley Woodrow pulled the ball back for Pajtim Kasami, who controlled and shot on the turn only for his effort to be blocked by defender Paul Dummett.

The ball was only half-cleared to Heitinga and his shot hit underside of the bar and appeared to cross the goal-line, although the goal decision review system showed otherwise by a matter of millimetres.

Fulham almost gifted Newcastle a goal when a stray pass let in Cisse but he could not capitalise, with Stockdale producing a smart save to keep out the striker's shot.

Nevertheless, Fulham kept pushing and Dejagah picked up the ball on the left, cut inside and unleashed a shot which Krul would have hoped to have saved rather than letting the ball go under his body.

Fulham, despite the late Newcastle penalty appeal, held on to secure their first league win since New Year's Day.