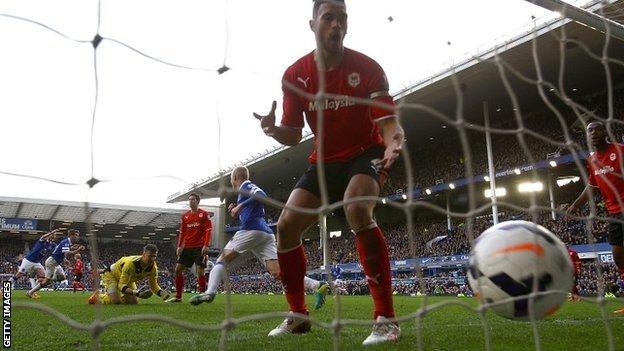 Cardiff were cruelly denied a point by Seamus Coleman's injury-time winner as the Bluebirds slipped further behind in their bid for Premier League survival.

Goalkeeper David Marshall looked to have earned a draw with a string of saves after Juan Cala had equalised Gerard Deulofeu's deflected effort.

But, after another stop to deny Romelu Lukaku's shot, Marshall was beaten by Coleman's miscue.

Cardiff fell to 19th and are now three points from safety.

The result at Goodison Park was harsh on Ole Gunnar Solskjaer's side, and Marshall especially, after the Scot made four crucial saves to keep his side in the game.

And with only eight league games left, starting at home to Liverpool next Saturday, they are running out of time to try and maintain their top-flight status.

Cardiff complained they were denied a penalty when substitute Wilfried Zaha fell under a challenge from Sylvain Distin but after their eighth successive league defeat away from home, they were the only team among the bottom five that failed to pick up points.

Prior to this game, Solskjaer said his team needed to emulate Wigan in 2012 when the Latics, then under Everton boss Roberto Martinez, won seven of their last nine games.

After Coleman's sliced winner, though, there must be a sense that fortune is against the Bluebirds as they failed to follow-up an important win over fellow strugglers Fulham last weekend.

Everton, on the other hand, kept up their European challenge with this victory, and moved above Manchester United into sixth place.

Having gained only 11 points from 24 available since the turn of the year, there were question marks over Everton's form coming into this game but they can now look forward to five home matches in their season run-in.

Unlucky and then some

They now stand two points behind fifth-placed Tottenham, although the prospect of a Champions League spot still looks remote as they trail fourth-placed Arsenal by eight points.

Martinez's side were on top for the majority of this encounter as Cardiff were indebted to Marshall for three superb first-half saves to deny Kevin Mirallas, Deulofeu and Lukaku.

But Solskjaer, who had started the game with three centre-backs, switched to a back four after 25 minutes and almost saw his side's fortunes change when Fraizer Campbell could not beat the diving Tim Howard after latching onto a ricochet on the edge of the penalty area.

The tactical change led to a more even midfield battle, and Campbell forced Howard into another save at his near post after the break.

It was a sign of Marshall's excellence that when the opener did arrive, it came through a deflection as Deulofeu received the ball on the left flank, skipped past Gary Medel and beat the Scottish goalkeeper at this near post via Steven Caulker's thigh.

The Bluebirds' disappointment did not last long, though, as they equalised when Cala steered in Peter Whittingham's set-piece. Everton complained that the free-kick was a soft one after Coleman's foul on Campbell.

Marshall pulled off his best save of the match to deny Lukaku again, before referee Roger East waved away Zaha's penalty appeals after he fell under a challenge from Sylvain Distin.

But Cardiff's frustration was yet to reach its peak as Coleman latched onto Gareth Barry's header to score a hugely fortunate winner from close-range.

"David Marshall in goal was phenomenal, as good an individual performance as you are going to see from a goalkeeper.

"You can say you get a bit lucky when you score the winner so, so late, but it was down to having that control and patience.

"I did think we deserved the three points but I thought Cardiff deserved huge, huge credit."

"It was a stonewall penalty for Wilfried Zaha when he goes through two or three of them at 1-1. I don't know how many times we have to look at us claiming penalties and not getting it.

"The performance was outstanding, a phenomenal effort. They had 'cojones' as you say."