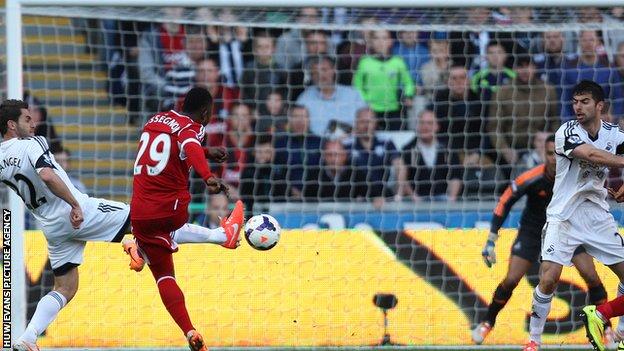 The Swans dominated the first half and went ahead early on thanks to Roland Lamah's solo effort.

Mulumbu then shot in off the post with five minutes left to give Pepe Mel his first win as Baggies manager.

The result moves West Brom to 16th, three points clear of the relegation zone and within one point of 14th-placed Swansea.

The hosts started brightly at a sun-drenched Liberty Stadium and took the lead after only two minutes.

Swans striker Wilfried Bony slid the ball through to Lamah out wide, who raced clear down the Albion right flank.

The 26-year-old skipped past Baggies full-back Stephen Reid inside the area, before curling the ball into the corner of the net from the edge of the six-yard box.

Swansea have won just four of their last 20 Premier League matches at home.

Swansea looked comfortable in possession and regularly released their wide men down the wings as they attempted to get in behind the Baggies' back five.

Routledge and Lamah whipped in low crosses at every opportunity as Mel's side found it difficult to get into the game and Albion were lucky not to fall further behind before half-time.

Bony connected with Lamah's low curling cross just six yards out but could only direct it straight at Baggies keeper Ben Foster, and captain Ashley Williams saw his downward header bounce narrowly over the bar.

After the break West Brom pressed higher up the pitch and showed more attacking intent, and it was not long before their more positive approach paid off.

James Morrison laid the ball to Sessegnon outside the Swansea area and the 29-year-old curled a powerful low drive into the bottom corner.

Swansea almost hit back straight away through a Jonathan de Guzman free-kick which forced a diving save out of Foster.

But the Baggies continued to press and with the game heading for a draw, the ball broke to Mulumbu on the edge of the Swansea area.

And the Congolese midfielder passed the ball in off the post to give the Baggies their second away win of the season.

"The pressure is the same for all the countries - in Spain, in England, Germany it's the same. My work is dangerous. Head coach is a difficult job, but the most important in football is the player."

"Second half for some reason we just switched off. We were sloppy. Sloppy in our passing, touches on the ball.

"We were poor and I think that just invited West Brom onto us. The second goal is always crucial in a game like that and unfortunately West Brom got it."