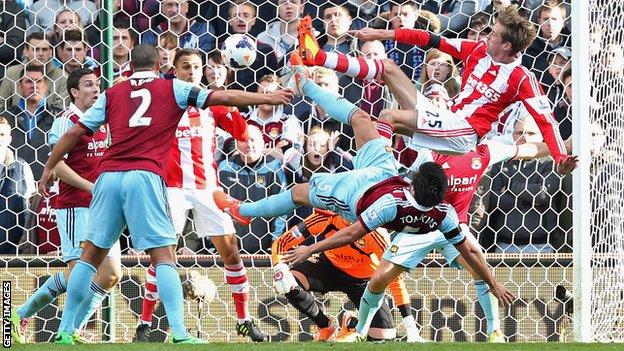 Peter Odemwingie scored twice as Stoke came from behind to claim victory against West Ham in the Premier League.

Andy Carroll headed in his first goal since April to give the visitors a perfect start.

But Stoke levelled when Peter Crouch's acrobatic effort deflected in off Odemwingie on the line.

Marko Arnautovic finished off a flowing four-man move to put Stoke ahead before Odemwingie slammed in his second from an acute angle.

The result extends Stoke's excellent recent run. Mark Hughes's men have now lost just once in seven games and have moved into the top half of the table.

West Ham will reflect on a penalty claim for handball against defender Marc Muniesa, waved away by referee Craig Pawson, that replays showed merited a spot-kick that would have brought the visitors level.

The Hammers had gone ahead after just five minutes when Carroll, who has been touted for an England World Cup call, rose impressively to nod in Mark Noble's free-kick ahead of Stoke goalkeeper Asmir Begovic.

The Potters levelled before the break when Crouch reacted quickest after Adrian had pushed his initial header onto the bar.

However, though Crouch wheeled away to celebrate, the effort belonged to Odemwingie, who was stood on the line when it struck him and diverted into the net.

Carroll had an effort beaten away by Begovic and Kevin Nolan saw a goal ruled out for offside before Arnautovic gave Stoke the lead.

The Austrian profited from a flowing move, then enjoyed a slice of luck on the edge of the area as the Hammers defence failed to deal with his forward burst, before prodding a fine shot into the corner for his first goal since October.

Had the Muniesa penalty decision gone their way, the Hammers could easily have set up a thrilling finish.

As it was, they were left distinctly unhappy at the ruling, even though the referee seemed to have a clear view of the incident.

And their mood was not improved shortly afterwards when Ireland set up Odemwingie.

The Nigerian has impressed since his January arrival from Cardiff. And while there may have been a large element of fortune in his first goal, there was no room for debate over the second, as he drove home from an acute angle.

It was enough to secure a victory that edges Stoke closer to safety, while at the same time leaving West Ham slightly too near the drop zone for comfort, despite manager Sam Allardyce picking up February's manager of the month award.

"Our defending for the second goal was pathetic. That has been our strength this season. Unfortunately today it has let us down badly."

On the penalty claim for handball against Marc Muniesa, he added: "It was an extremely poor decision. It was right in front of him (the referee), he had a perfect view. The ball hits the lad on the left arm.

"I am completely and utterly baffled. Sometimes they do not have the courage - 999 times out of 1000 that would be given."

"In those situations you are going to raise your arm because he was trying to get above Andy Carroll. It probably did catch his elbow but he wasn't even looking in that direction.

"If it had gone against us we would have still won. We were the better team."

On Stoke's first goal he added: "It was a bit of a scramble.

"Peter Crouch did really well to get it towards goal. But Peter Odemwingie is a striker and he will claim it. I would if I was in his position."