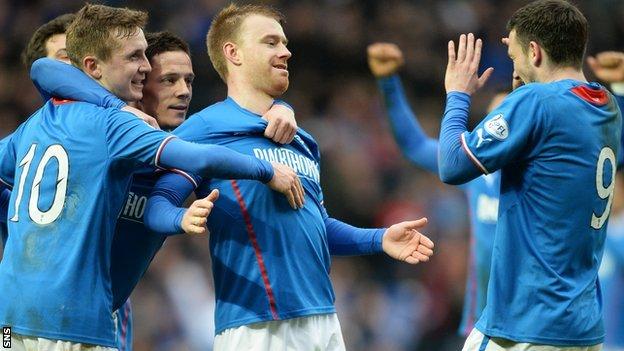 Rangers continued their dominance of League One, even if their victory over Dunfermline was routine rather than eye-catching.

The visitors at Ibrox were the more impressive side in spells, but Stevie Smith's well-struck free-kick and Calum Gallagher's late goal secured the win.

Dunfermline were reduced to 10 men when Danny Grainger was sent-off in the second half.

That allowed the champions to see out a relatively comfortable win.

Priorities had changed for Rangers. Having secured the League One title last Wednesday night, and with the Scottish Cup quarter-final replay against Albion Rovers to play on Monday, fringe players were introduced.

There were future starting places to play for, but instead a lacklustre mood was also introduced to the team.

Dunfermline, who were crisp and accomplished on the ball, took advantage, creating a series of half-chances.

Callum Morris headed just over, Lawrence Shankland only narrowly failed to make contact with Ross Forbes' ball across the face of goal, and the consistently impressive Stephen Husband tested the Rangers goalkeeper Cammy Bell with a shot from the edge of the penalty area.

Resourcefulness was required, since Dunfermline had to cope with the loss of goalkeeper Ryan Scully through injury after four minutes.

Jim Jefferies then took off Alex Whittle early in the first-half, and the Dunfermline manager angrily upbraided the player for some slight or other after he took his seat on the bench.

Ross Forbes, the Dunfermline midfielder, will have been frustrated that he sent a free-kick spinning just wide from 20 yards, since the visitors were more enterprising.

As if to emphasise that sense of regret, Smith lined up a free-kick from a similar range at the other end deep into injury time.

His strike was precise and powerful, leaving the substitute goalkeeper Ryan Goodfellow with no chance of reaching the ball as it flew into the top corner.

The goal flattered Rangers, even if Dunfermline had been unable to fashion a clear-cut chance of their own. Neither side was able to take full command after the interval, and there seemed to be an air of acceptance about the outcome.

Rangers were revitalised by the introduction of the teenage midfielder Calum Gallagher in the second-half. He played with enthusiasm and determination, and one surge upfield drew a foul from Grainger.

Having been booked earlier, the Dunfermline defender started walking off even before the referee Kevin Clancy showed him a second yellow card.

Gallagher completed a memorable appearance with a goal in the 90th minute, the ball running to him just inside the area and the teenager drilling a shot beyond Goodfellow.

This, though, was a game with few memorable moments.