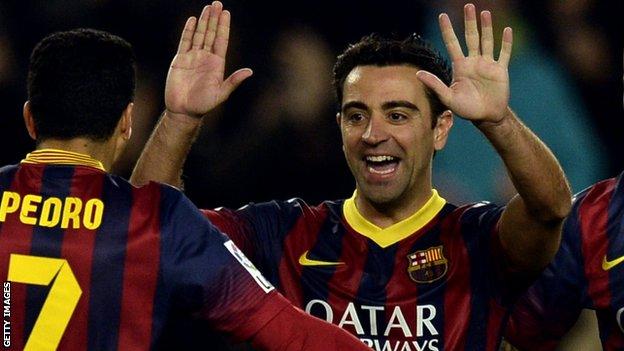 Barcelona midfielder Xavi says he wants to take over as the Catalan club's head coach after he retires from playing.

The Spain international, 34, has spent his whole career at Barca, making 700 appearances and winning 22 trophies.

"I'd love to, yes... but that's for the future," Xavi told the Daily Mail when asked if he wanted to coach the club.

"I'd like to remain in football forever and it would always have to be with Barcelona. That's where my heart and feelings are."

The Catalonia-born playmaker's contract at the Nou Camp expires in 2016 and, although he wants to move into management in the future, he is focused on playing for as long as possible.

"Right now I love to play football. When you're a kid playing, you enjoy having the ball, don't you? All I ever want to do is have the ball at my feet, bossing the game," he added.

Xavi joined Barca's famed La Mesia academy as an 11-year-old in 1991 and was given his first-team chance under Dutch coach Louis van Gaal in 1998.