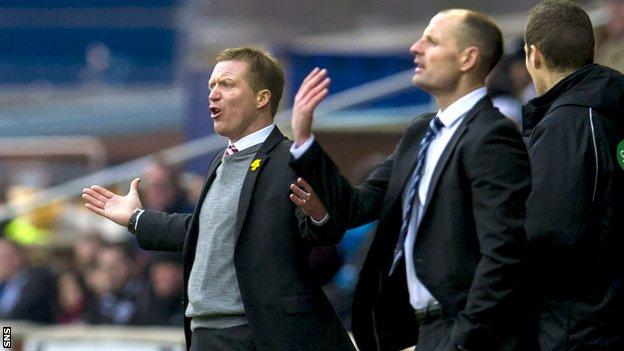 It was level at the break but Boyd struck twice at the start of the second half for the home side.

Johnston told BBC Scotland: "It was a big result for us, we had to win. It was a home game against the team that's bottom of the league."

It was a welcome three points for the Ayrshire men as they bounced back from last week's defeat by St Mirren to move up to eighth in table - four points clear of second-bottom Ross County.

"I thought we made hard work of it to be honest," said Johnston. "We gave away too many cheap goals again, but there was a lot of positives to take out of the performance.

"I think in the second half they played really well. We passed the ball well, created a few chances. We know we've got to work defensively and do a lot better.

"There was pressure on us to win it. We've went out there and won the game, and now we've got to build on that, but there's still a long way to go."

Johnston also singled out Rory McKenzie, with the 20-year-old having another fine match before limping off with injury.

"He seems to be getting better and better," said the Kilmarnock boss.