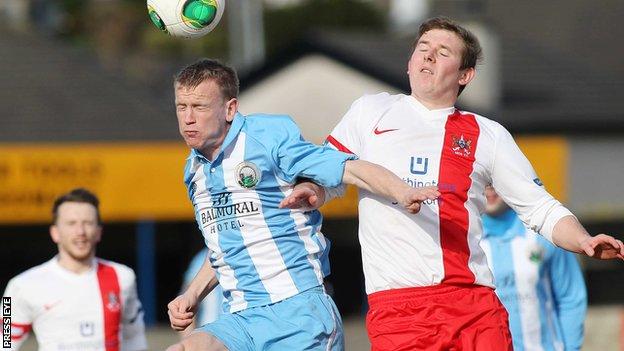 Ards boosted their survival hopes by beating Warrenpoint 2-0 in the relegation showdown at Stangmore Park.

A scrappy first half, devoid of quality and chances, was followed by a more entertaining second 45 minutes.

Mark Burns headed in from Craig McMillen's corner to put Ards ahead a minute after the restart.

William Faulkner pounced to net on the follow-up after Jonathan Parr saved a shot as basement side Ards closed the gap on Warrenpoint to five points.

All the quality came in the second half and it was just seconds old when a bullet header from Burns gave Ards the lead.

Sean Cleary squandered three opportunities for the vistors, who missed out again when Andy Mitchell mis-hit his shot in front of an open goal.

Parr kept out Mitchell's header but the ball fell to Faulkner and he found the net to make it 2-0 after 78 minutes.