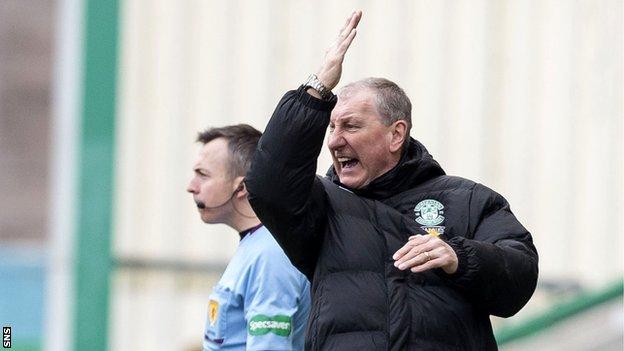 Terry Butcher was dismayed by Hibs' defending despite seeing them fight back from two down to draw with Motherwell.

"When you look at the quality of the game, it's shocking. But there's been six goals and there could've been more," Butcher told BBC Scotland.

"It's another three goals we've shipped at home. It sums up our season."

Does it take for us to go 2-0 down before we start to play?

Goals by Sutton and Lionel Ainsworth saw Motherwell establish a commanding lead. But Jordon Forster pulled one back before the break to spark hopes of a Hibs revival.

Michael Nelson equalised with a header that hit the crossbar before crossing the line and Heffernan appeared to have sealed a memorable comeback.

However, the home side's defensive frailties were exposed for a third time when Sutton levelled moments before the end.

"If the man from Opta stats was here he'd be disappointed because both teams had a record number of giving the ball away and unsuccessful passes," Butcher said.

"We've done well to claw back into the match and the natives were restless at 2-0 down.

"We weren't playing well and Motherwell were dominating the game. Everything that we were trying to do just didn't come off. But the last 10 minutes of the first half gave us hope and Jordon's goal gave us something to cling onto.

"At half-time it was always about being brave and taking the ball and passing it. After going ahead with three minutes remaining in the match, you think: 'let's see it out' but no, we can't do that. It's another three goals we've shipped at home.

"Three very poor goals from our point of view and it's cost us two points. They (the players) need to show me more. Does it take for us to go 2-0 down before we start to play?

"Having said that, we were good for the first 11 minutes and they've scored with their first attack. We've got one end right - scoring three goals at home - but haven't won the game.

"We didn't look comfortable at the back and they've got good players on the edge of the box. We weren't picking up second balls and it was so flat. It sums up our season.

"There's so much football to be played before we start work (on the squad) in the summer. I just despair that we've lost another three goals.

"We're supposed to have experienced players at the back, in midfield and yet, we can't stop shipping goals. That's criminal."