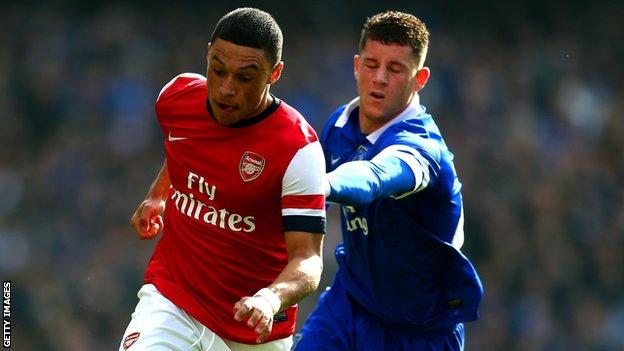 England manager Roy Hodgson will be bombarded with advice between now and 13 May when he delivers the names of his 23-man squad for this summer's World Cup, plus seven stand-by players.

Hodgson's thoughts on the men he takes to Brazil will have mostly crystallised by now - although the final party is always shaped by injuries and the prospect of the late "bolter" coming into contention.

He will rely on the evidence of his own eyes as he conducts his final tour of examination and there were two compelling sights on show during Arsenal's 4-1 FA Cup quarter-final win against Everton.

In Arsenal's Alex Oxlade-Chamberlain and Everton youngster Ross Barkley, Emirates Stadium witnessed two talents who may well be of service to Hodgson in South America this summer. The pair played prominent roles in a fine Cup tie that ended with a scoreline that did not do justice to Roberto Martinez's side.

Oxlade-Chamberlain, 20, is now finally moving towards full fitness after a five-month spell on the sidelines following a knee injury picked up on the opening day of the season against Aston Villa.

And against Everton he showed the sort of freedom of expression and talent that has already brought him one happy memory at the Maracana with a goal in England's 2-2 friendly draw in Brazil last May.

He was involved in many of Arsenal's best attacks as they secured victory on a day when defeat was simply unthinkable, showing determination to match his dash. He also fashioned the game's vital moment, his persistence in the penalty area drawing a foul from Gareth Barry's outstretched leg and allowing Mikel Arteta's retaken penalty to give the Gunners a lead they never surrendered.

Oxlade-Chamberlain may also be the beneficiary of the long-term injury to his Arsenal team-mate Theo Walcott but there is still work to be done, and performing in the manner he did against Everton will no doubt draw further attention from Hodgson.

Southampton's Adam Lallana has shown enough excellence for many to suggest he is already on the plane, while the all-purpose James Milner is trusted implicitly by Hodgson. Liverpool's Raheem Sterling is right at the heart of the equation now while Tottenham's Andros Townsend will want to build on his impact in England's latter World Cup qualifiers.

But Oxlade-Chamberlain may just be peaking at the right time after his long absence - and having tasted the unique atmosphere of Rio, with success, he will have the hunger to produce the performances to sample more.

Everton's Barkley, also 20, may have ended on the losing side but his was a display that once again hinted at gifts England will be using for years to come.

And with the Gunners' Jack Wilshere now fighting for fitness and facing six weeks out after breaking his foot against Denmark at Wembley on Wednesday, Barkley has the chance to emphasise his claim should Arsenal's midfielder not recover to schedule.

Indeed, there are plenty of shrewd observers who believe Barkley should go to the World Cup irrespective of Wilshere's fitness, such is the "X factor" he possesses.

Despite his powerful frame, Barkley can demonstrate great subtlety in his passing and touch but also offer a serious threat with his bludgeoning running - usually forward and with menace at every possible opportunity. Barkley's first move is always positive and he was back close to his best against Arsenal.

His form has dipped somewhat in the wake of the broken foot he sustained in the FA Cup against QPR in January and manager Martinez's mistaken decision to rush him back too hastily into the Merseyside derby against Liverpool at Anfield the same month.

On these occasions he can seem almost too eager to do well, but when he gets it right there is a potency and creativity to his game Hodgson has to consider harnessing.

Barkley's decision-making can still be suspect but maturity should solve that problem and if England do select a squad that looks beyond Brazil, where all reality suggests they are not among the live contenders, then he falls firmly into that category.

Arsenal struggled to cope with his running and passing in the first half and it was no surprise when he created Romelu Lukaku's equaliser with a rampaging surge and cross that Kevin Mirallas almost apologetically turned back into his fellow countryman's path.

He will feel he should have done better with a chance from 12 yards that could have put Everton ahead but even after Arsenal regained the lead, it was again Barkley who almost put the Toffees back on terms with a shot that swept inches wide.

Arsenal's victory means that even if they fail to overturn Bayern Munich's 2-0 advantage in their Champions League last 16 game at the Allianz Arena on Tuesday, hopes of ending their barren sequence stretching back to the 2005 FA Cup live on.

Arsenal move on to the FA Cup semi-final at Wembley and Everton concentrate on qualifying for Europe via the Premier League.

Oxlade-Chamberlain and Barkley will be vital to those ambitions - and perhaps to England's World Cup aspirations too.