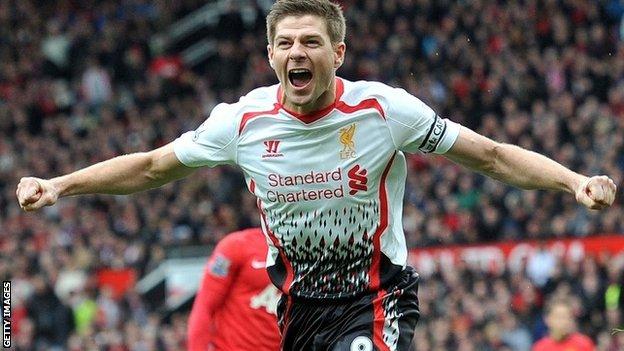 In what was seen as the biggest test of their ability to claim their first crown since 1990, Liverpool passed the examination in emphatic fashion against an abject United to move to within four points of leaders Chelsea, with a game in hand.

Liverpool captain Gerrard demonstrated their superiority with penalties either side of the interval as Brendan Rodgers's side exerted almost complete domination over a home team looking in need of a drastic overhaul.

Gerrard missed another spot-kick after Daniel Sturridge went to ground under a Nemanja Vidic challenge - the United captain picking up his fourth red card against Liverpool in the process - but there was no stopping Luis Suarez as he added a third.

At this stage last season there was a 29-point gap between these sides in United's favour as they beat Rodgers's team 2-1 at home.

But Liverpool's dominance here underscored the scale of the turnaround, their improvement and the collapse in fortunes at Old Trafford since manager David Moyes succeeded Sir Alex Ferguson.

"It was one of the most comprehensive away performances at Old Trafford for many years. Liverpool absolutely battered them in all areas and United looked like strangers. Make no bones about it, it could have been six or seven, Liverpool's movement was so good.

"Liverpool were on the front foot and United were nowhere near it. Adnan Januzaj and Juan Mata out wide is not working for them. You can see why Jose Mourinho got rid of Mata - you need legs to get up and down and he hasn't got that. There's no point him being on the pitch."

READ MORE: How Moyes got it wrong, again

Moyes must now pick up a bedraggled team before Wednesday's return Champions League game against Olympiakos, where they need to overcome a 2-0 deficit from the first leg in Greece.

For Liverpool, Rodgers and their exultant supporters there are no such concerns. The Reds are flying high with a self-belief that marks them out as having a real chance to win the title.

And with Manchester City and Chelsea, who lost to Aston Villa on Saturday, still to visit Anfield, Liverpool have been presented with a wonderful opportunity to claim the prize that was once almost a permanent presence in their trophy room.

Liverpool's intentions - not to mention the confidence now surging through this team - were clear inside two minutes as Sturridge found space inside the area from Jordan Henderson's pass but could not find the target.

They had claims for a penalty ignored when Marouane Fellaini tangled clumsily with Suarez. The Uruguayan stayed on his feet and was left a picture of frustration when the spot-kick was not awarded.

Sturridge squandered another opportunity for Liverpool, but that was a further sign of a sharpness and threat that was in complete contrast to a pedestrian United.

The goal Liverpool deserved finally arrived 10 minutes before the break when Rafael, who had just been booked for a wild challenge on Gerrard, clearly handled in the area. It was a straightforward decision for referee Mark Clattenburg and Gerrard scored the spot-kick with ease in front of the Stretford End.

United were unable to get their main attacking players into the game but they were given hope by Wayne Rooney's rising drive which was turned away by the diving Simon Mignolet.

The last time Liverpool won at Old Trafford captain Steven Gerrard scored from the penalty spot. The Reds skipper converted in their 4-1 victory in March 2009.

All the plans Moyes will have laid out during the interval were sabotaged within moments of the restart as Liverpool were awarded a second penalty after Phil Jones bundled Joe Allen to the ground. Once more Gerrard stepped forward and once more he demonstrated his expertise from the spot.

Liverpool had been virtually untroubled but a rare ragged passage of play persuaded Rodgers to introduce Philippe Coutinho for Raheem Sterling with 19 minutes remaining.

United, in a move that was long overdue, made a change of their own with 15 minutes left, sending on Danny Welbeck and Tom Cleverley for Fellaini and Adnan Januzaj.

Remarkably, Liverpool were awarded a third penalty when Sturridge went down with Vidic in close proximity.

The Serbian defender remonstrated with the Liverpool striker, who he clearly felt had dived, and his frustration increased as he received a second yellow card and made his way off disconsolately.

Gerrard, with the rarest of opportunities, could not make it a hat-trick of successful penalties by a visiting side at Old Trafford, striking his effort against the base of the post.

Liverpool were taking full advantage of their numerical supremacy and it was no surprise when Suarez ran unhindered into the area to score, having been denied by a magnificent save from De Gea moments earlier.

United's fans chanted in defiance as the final whistle approached - but they were forced to accept an ominous message about their own shortcomings and Liverpool's growing stature as Clattenburg blew.

Visit the BBC Sport Facebook page for a gallery of the best pictures from Sunday's Premier League matches.