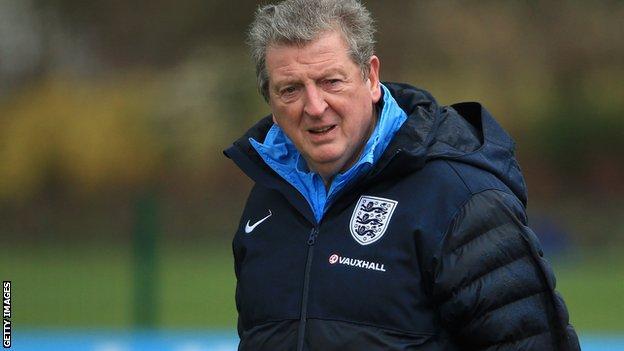 Roy Hodgson says he hopes to continue as England manager until the end of his contract in 2016 - regardless of how his team performs at the World Cup.

The 66-year-old signed a four-year deal with the Football Association in May 2012, and says he would be open to continuing beyond Euro 2016.

"I shall be working hard to fulfil the contract and hope that the FA will fulfil their side of it," said Hodgson, who has won 14 of 25 games in charge.

"Another one after that? Who knows?"

England face a tough group in Brazil this summer, and kick-off their campaign against Italy in Manaus on 14 June.

They then meet Uruguay on 19 June and Costa Rica five days later.

England were unbeaten in qualifying as they won their group to secure their World Cup place.

But Hodgson said he was unsure whether he would still be in his post after this summer's finals.

"Whether contracts mean four years when you sign them or not, that's not anything to do with me. That would be other people's decisions."

Hodgson will name his 23-man squad and seven standby names on 13 May, before a friendly against Peru at Wembley on 30 May.

England will then travel to Miami for a warm-weather training camp in Miami, where they will play Ecuador and Honduras, before flying to Brazil.