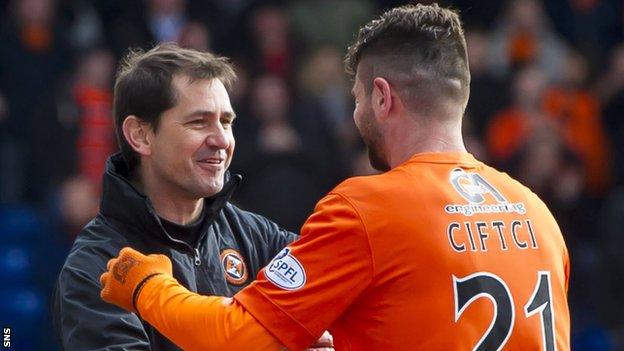 Jackie McNamara believes Dundee United's slump is behind them after they defeated nine-man Inverness 5-0 to make the Scottish Cup semi-final.

Both Greg Tansey and Marley Watkins were red-carded for the hosts.

"We had that little spell which everybody has in the middle of the season," said McNamara. "Hopefully ours is well beyond us."

Having suffered four defeats in the December-January period, United have now won their last five games.

Ciftci had been sent off in October's League Cup tie against Inverness as United were on the losing side, but this time the visitors had the game wrapped up by half-time.

And the Tangerines will face either Albion Rovers or Rangers at the semi-final stage.

"I'm absolutely delighted," McNamara said. "I thought we started the game well. It was a great goal by Nadir and even with the second one, his desire to chase it down and not give up - he got his reward for that.

"We worked hard. We knew we'd have an extra man in the midfield with Yogi [Inverness manaegr John Hughes] going for two men up the middle.

"Sean Dillon coming back for us was excellent. There was a lot of good performances and we deserved to win.

"I thought we were comfortable in the game. They had one free-kick they got the second ball from, but I don't think they caused any problems. There wasn't a lot of creativity from them."

Every game in the semi-final is always difficult, but we're determined to go all the way this year

Paul Paton was booed by the home support after he first escaped a booking for a late lunge on Billy McKay, and was the man brought down by both Tansey and Watkins when they earned their red cards.

However, McNamara backed his man and praised his contribution.

He told BBC Scotland: "The last 20 minutes was quite flat after we'd scored the fifth goal, but Paul doesn't change the way he goes about business.

"He had one or two moments where we were a bit slack in possession but Paul keeps going, he does that in training.

"He's a fantastic attitude. I thought he was outstanding."

He added: "We've got some young players in the dressing room, and I think we've learned from the last time we were up here how to compete first and foremost, and make sure when we get the chance to play we do it properly and hurt teams.

"We were clinical there with Mackay-Steven's finish, and a fantastic header by Armstrong from a near-post run."

Dundee United are now in the last four of the Scottish Cup for the second year in a row. Last year they lost agonisingly 4-3 to eventual winners Celtic, and the Tannadice boss feels that experience may help them in this year's Ibrox semi-final.

"Every game in the semi-final is always difficult, but we're determined to go all the way this year," said McNamara.

"We got beat in the semi-final last year. We're disappointed from that so hopefully we can learn from that last year and kick on."