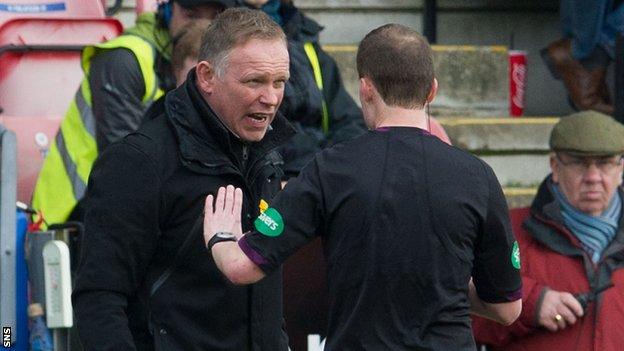 John Hughes slammed the two red cards dished out to Inverness in their 5-0 Scottish Cup quarter-final defeat by Dundee United.

Referee Willie Collum ordered off both Greg Tansey and Marley Watkins, while Graeme Shinnie conceded a penalty as United ran riot in the Highlands.

"I don't know. I don't know what the rules are these days," Hughes told BBC Scotland.

"It's disappointing, but that's not the reason why we lost the football match."

After Tansey was dismissed, United continued their dominance into the second-half with Gary Mackay-Steven and Stuart Armstrong both finding the net before Watkins also saw red.

"If you see the first one, it's actually the Dundee United boy that kicked the sole of his foot, so it's disappointing.

"Give credit where it's due - Dundee United were good and they deserved it, but we made it easy for them."

To win a football match of this importance, of this magnitude, you have to be solid and resolute, and we weren't that

It is the second week in a row Inverness have conceded five goals, and Hughes admits he has his work cut out to get the confidence up before next Sunday's League Cup final with Aberdeen.

"First and foremost you're never going to win a football match if you concede the goals we conceded," he said. "As I said last week, it's very uncharacteristic of us.

"I felt the first two goals were self-inflicted, we could have defended them better and before you know it you're chasing the game.

"The third one's a penalty. I've seen them given, no complaints about that. With the sending off you're up against it and it's damage limitation after that.

"It's easy to pass the ball when you're playing against nine men and that was the case. I didn't see them cutting us open when we were 11.

"To win a football match of this importance, of this magnitude, you have to be solid and resolute, and we weren't that.

"I like to think I've got strong characters that are hurting. They always say in football the next game can't come quick enough so hopefully that'll be the case against Hibs on Wednesday."