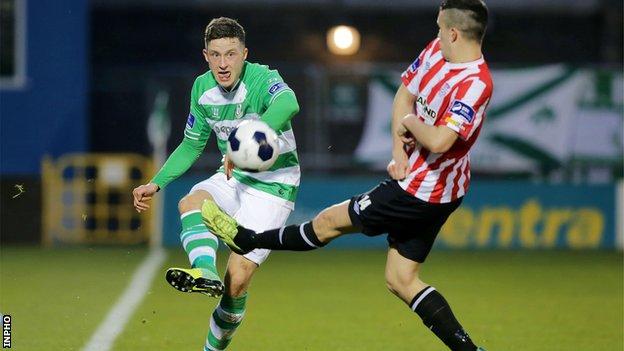 Ciaran Kilduff equalised for Shamrock Rovers deep into injury-time as Roddy Collins started his reign as Derry boss with a 1-1 draw in the league opener.

Enda Curran fired wide for the Candystripes in a disappointing first half between two new-look sides.

Derry debutant Mark Stewart put City ahead when his deep cross found the top corner of the Rovers net.

The hosts pressed for the equaliser and Kilduff headed home from eight yards in the fourth minute of added time.

It was a scrappy, disjointed first half with Curran, one of six City debutants, shooting low and wide with the only chance of note in the opening 45 minutes.

The game came to life after Stewart made the breakthrough on 48 minutes, his cross catching the breeze and flying past deceived keeper Barry Murphy.

Doherty pushed over a Gary McCabe strike before Murphy got down low to save a curling shot from Derry substitute Rory Patterson.

Kilduff's angled drive was blocked by the outstanding Ryan McBride before the Rovers striker sent a looping header over after 78 minutes.

Substitute Stephen McPhail sliced wide of the City goal while Patterson squandered a late chance to guarantee a Derry victory when Murphy saved his weak shot at the second attempt.

City's resistance was finally broken with two minutes remaining of added time, Kilduff despatching the ball into the corner of the Derry net from a floated cross.