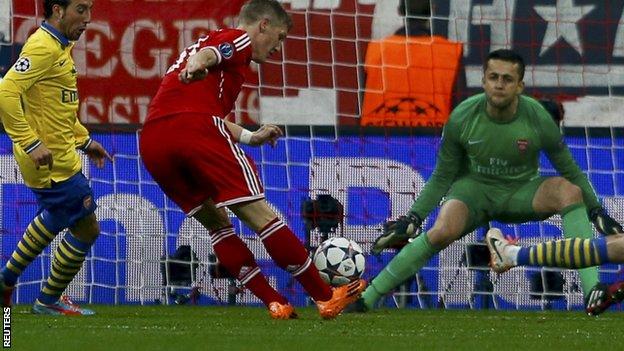 Arsenal exited the Champions League at the first knockout stage for the fourth year in a row after drawing at holders Bayern Munich.

A dominant Bayern, leading 2-0 from the first leg, had a Javi Martinez volley ruled out for offside before the break.

Bastian Schweinsteiger gave Bayern the lead from close range before Lukas Podolski shot high into the net to level the score on the night.

Thomas Muller had a late penalty saved as Bayern won 3-1 on aggregate.

The damage was done in the first leg at Emirates Stadium, where Arsenal will rue an early missed penalty by Mesut Ozil and the dismissal of goalkeeper Wojciech Szczesny.

Few gave the Gunners much chance of overturning the 2-0 deficit at the defending European and German champions, who won a record 16th Bundesliga game in a row against Wolfsburg on Saturday to go 20 points clear at the top.

No side has ever retained the Champions League crown but, unbeaten in the league for 49 matches and now in the quarter-finals, Bayern are strongly fancied by many to make history in Lisbon in May.

Arsenal did go into the match with reasons for hope, having been the last team to prevent the German side from scoring when they beat them 2-0 at the Allianz Arena at the same stage last season, although the Gunners went out that night on away goals.

Bayern's defeat by Arsenal last season was the only game the Bavarians had failed to score in in their last 100 matches and a composed start by the hosts made the prospect of another shut-out an unlikely one.

For all their control, Arjen Robben's volley that bounced over the bar was the closest Bayern went in an uneventful opening before Martinez's volley was rightly disallowed for offside.

The Gunners have won on three of their last six visits to Germany, with the other three trips ending in draws.

Alex Oxlade-Chamberlain was looking a threat for Arsenal, who only named six substitutes because the Gunners did not realise Ryo Miyaichi was ineligible to play, as his intermittent quick breaks gave the visitors hope there was still a route back into the tie.

By the break, Bayern had enjoyed 71% of possession with a resilient Arsenal impressive defensively but needing more as an attacking threat.

The difficult task became almost impossible soon after the restart as Franck Ribery cut inside on the left and squared for Schweinsteiger, who calmly converted from close range.

Arsenal hit back immediately though as Podolski nudged Philipp Lahm off the ball, before shooting high into the net from an angle, leaving them needing two goals again to progress.

Bayern never looked threatened though as Muller was prevented from winning the match on the night for Bayern by Lukasz Fabianski's penalty save, after Robben was fouled by Laurent Koscielny.