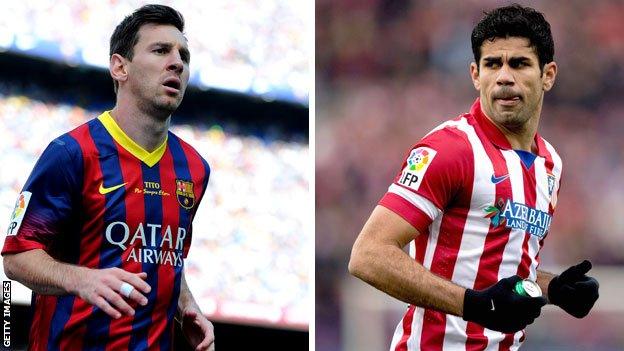 Barcelona host Atletico Madrid on Saturday as a dramatic Spanish title race concludes with a final-day showdown between the top two.

Here's what can happen at the Nou Camp:

If teams are level on points in the Spanish top-flight then they are separated by their head-to-head record, not goal difference.

Barcelona will move level with Atletico on 89 points if they secure victory.

And it means they will go above Atletico as a win gives them a superior head-to head record, after the sides drew 0-0 in January's reverse fixture.

History is in the Catalan club's favour, having won their last six La Liga games against Atletico at the Nou Camp.

With Diego Simeone's side holding a three-point advantage, they know a draw will be enough to clinch a first La Liga title since 1996.

Atletico have already earned two draws at the Nou Camp this season - a 0-0 stalemate in August's Super Cup and a 1-1 draw in the Champions League last month.

Los Rojiblancos have not won a league match at the Nou Camp since February 2006, when Fernando Torres scored twice in a 3-1 win.

They know that ending this dismal record is not essential, but victory in front of a passionate Catalan crowd would end a superb season in style.

Elsewhere around the continent

Ligue 1: Paris St-Germain retained their title for a second successive season on 7 May after nearest rivals Monaco failed to beat Guingamp. The principality side's 1-1 draw left them seven points adrift of PSG with two matches remaining, meaning the Parisians could afford to lose 2-1 against Rennes later in the day.

Serie A: Defending champions Juventus wrapped up a third successive title after Roma lost 4-1 at Catania on Sunday, 4 May.

Coppa Italia: Napoli beat Fiorentina 3-1 in the final on Saturday, 3 May.

German Bundesliga: Bayern Munich clinched the Bundesliga title with a record seven games to spare after they won 3-1 at Hertha Berlin in March. That result put them 25 points clear with only 21 points left to play for.