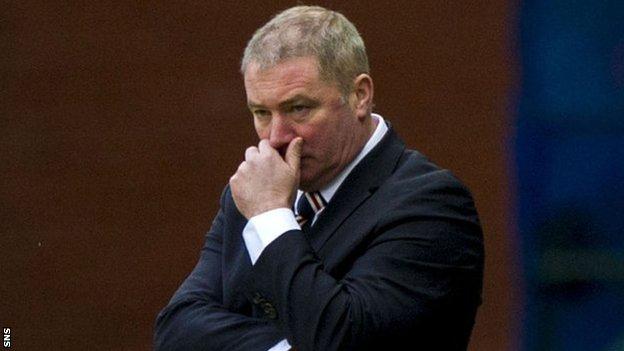 Rangers manager Ally McCoist insisted there was no shame in his League One leaders being held to a Scottish Cup draw at home to Albion Rovers.

"It is disrespectful to Albion Rovers, who knocked Motherwell out of the Cup," said McCoist after Sunday's 1-1 draw.

Indeed, the part-timers from League Two believed that Bilel Mohsni's 77th-minute equaliser should have been ruled out for a foul.

But an adamant Rangers manager said: "It's a goal for me."

Ciaran Donnelly shot the visitors into a surprise lead in the 13th minute at Ibrox and Rangers were growing increasingly frustrated until Mohsni bundled the ball and Rovers goalkeeper Neil Parry over the line in his determination to get to a David Templeton cross.

People can judge for themselves if it was a foul, but I was certainly disappointed in the decision

"If you look at Mohsni, not having seen it again, he jumps and I don't think he has any idea where the goalkeeper is and it hits his head and goes in," said McCoist.

"I think the easy decision for the referee was to give a foul, but I thought he was very brave in giving the right decision."

The replay could be moved from Tuesday 18 March to Monday 24 to avoid clashing with Champions League football if it is chosen for live television coverage.

Hamilton Academical's New Douglas Park is being looked at as the possible venue because Rovers' Cliftonhill Stadium is too small for the expected travelling support.

It could also mean Rovers and Rangers requesting postponements of their respective league matches before the replay.

The winners of the replay will face Dundee United, who hammered Inverness Caledonian Thistle 5-0, in the semi-finals, with Rangers' Ibrox Stadium having already been chosen as the venue.

"It would be wild of me to have the audacity to look forward to a home tie against Dundee United," was McCoist's reaction to the draw. "I am certainly not going to do that.

"I am obviously relieved that we are still in the Cup. But we got the break, got the goal and the main feeling is relief."

Parry, who works at the Tax office in East Kilbride during the day, suggested that referee John Beaton got it wrong for the equaliser.

"It would have been interesting if it was the same scenario at the other end to make it 2-0," he said. "People can judge for themselves if it was a foul, but I was certainly disappointed in the decision.

"I did think it was a foul, I felt he led with his arm and jumped in.

"The referee just said he didn't think it was a foul and I am not going to criticise him, but I don't want to take away from a terrific display."