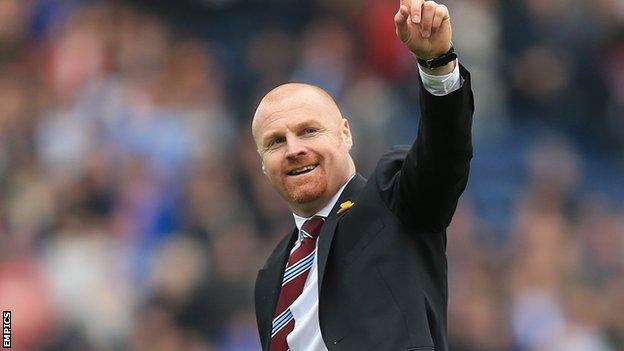 Manager Sean Dyche dedicated Burnley's 2-1 victory over Blackburn, their first against their Lancashire rivals for 35 years, to the club's supporters.

The Clarets came from 1-0 down at Ewood Park, Jason Shackell and Danny Ings scoring second-half goals, to claim a first win over Rovers since April 1979.

"People like me will come and go at clubs, but things like that stay forever," he told BBC Radio Lancashire.

"That's a great moment. That one's for the fans and the people of Burnley."

The 42-year-old, whose side are now eight points clear of third-placed Derby in the race for automatic promotion, added: "I have great pride in this group and what we're all achieving, and I think the fans have as well.

"The team have given them something to be proud of."

Blackburn, who failed to close a six-point gap between themselves and the top six despite going ahead through Jordan Rhodes, had won seven and drawn four of the 11 meetings following Burnley's previous derby success.

"It's very painful and a lot of people in the dressing room are hurting," said Rovers boss Gary Bowyer.

"We've got to regroup now because people will write us off [to reach the play-offs].

"The pain, the frustration and the anger that everyone has inside that dressing room - we now have to channel that and use it in the remaining 13 games."