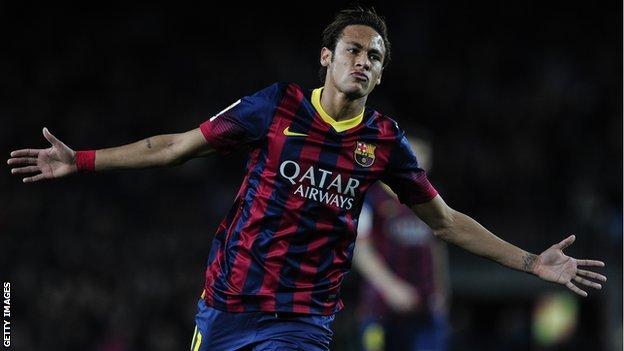 They pride themselves on being "mes que un club" - more than a club.

And in recent years Barcelona, inspired by the brilliant Lionel Messi, managed to achieve untouchable status on the pitch at the same time as remaining true to that motto.

But things are changing at the Nou Camp. Not only has the team's form suffered since Pep Guardiola left at the end of 2012, there are now serious questions over the way this great club do business.

When forward Neymar joined from the Brazilian team Santos last June, Barcelona said they paid a total of £48.6m.

But one of their members, a pharmacist called Jordi Cases, asked the club whether this was really the final bill. When Barcelona refused to answer, he went to the Spanish courts who launched an investigation.

From that point on the story really began to unravel. First the Spanish prosecutor said they would investigate the deal to see if the club had defrauded the treasury of unpaid tax.

The club said they had nothing to hide but then in January, under intense public pressure, the club's president Sandro Rosell resigned.

He said it was for personal reasons but Rosell had personally overseen the mission to land the 22-year-old, one of the hottest properties in world football.

Between the initial fee paid in the summer, signing-on fee, wages during his five-year deal, agents fees and this latest tax payment, Neymar will have cost the club £106.8m

In an unprecedented move, Bartomeu - a close ally and friend of Rosell who was vice president at the time of the signing - went further, explaining exactly where all the money had gone.

There was a £33m compensation fee paid to Neymar's father to ensure he joined Barcelona.

But there was also an £8m signing-on fee, a £6m fee for taking an option on future Santos players, £2m in agents fees (also paid to Neymar's father) and a further £2m to Neymar's charitable foundation in Brazil.

The club also revealed that Neymar was being paid £9m a year in wages.

The numbers are mind boggling.

And I can't recall a major European club ever opening the books on a transfer in this way. It provides a fascinating insight into the sort of agreements and payments teams have to make to secure the top players - especially from South America where many stars are owned by companies and wealthy individuals rather than clubs.

By unwrapping the deal in public, Barcelona hoped that the problem and the Spanish courts would go away.

If anything it only added to their determination to investigate the transfer and two weeks ago the judge Pablo Ruz announced the case would go ahead.

That prompted Barcelona to pay £11m to the Spanish treasury as a "complimentary tax declaration".

And yet the problem just won't go away with Barcelona still facing the very real possibility of having to explain themselves in court. The lawyer for Jordi Cases has told the BBC he believes the case will still go ahead.

It's a real mess and one that has undoubtedly hurt the club's image.

No wonder they are on an international charm offensive and on Monday I asked Bartomeu how he and his board can begin to restore Barcelona's reputation.

"It's our obligation to explain to everybody that we did everything in the proper way," he said.

Did you know? Over 14,000 Brazil fans signed a petition unsuccessfully demanding that Neymar be called up for the 2010 World Cup finals after he was not named in then head coach Dunga's squad.

"It's embarrassing because we think we are right. We are not happy with the situation but we will defend our club very strongly when the judge will call us to declare."

Bartomeu claims the dispute boils down to a disagreement over who is responsible for some of the tax on the various agreements and contracts. Should it be paid by Neymar's father in Brazil, or in Spain because those payments constitute part of the contract with the player?

So why pay the Spanish treasury £11m now?

Bartomeu continued: "We paid because of prudence and because there is a possible different interpretation. For us this is an absurd situation and an unfair situation."

I asked him whether the emergence of clubs like Manchester City and Paris St-Germain, which are owned by super rich benefactors, was making it harder for a club like Barcelona to compete?

"Of course we are a very big club. We are the biggest club in the world but when we compete with unlimited sources we have to find other ways, other strategies."

The timing of all this couldn't be worse.

The team are misfiring. They lost against Real Valladolid on Saturday and are now four points behind La Liga leaders Real Madrid, with 11 games to go.

Holding a 2-0 first-leg advantage over Manchester City, Barcelona should reach the quarter finals of the Champions League on Wednesday, but with Messi struggling with injuries and the new coach Gerardo Martino struggling to find the best way of combining the Argentine with Neymar, pessimism has replaced buoyant confidence.

Form, as they say, is temporary while class is supposed to be permanent and the far greater challenge for Barcelona is to show that the furore over the Neymar deal is not part of a general slide in values.

Next month the club's 164,000 members will be asked to vote on whether the Nou Camp should be expanded and modernised as part of a £500m project, which would include the increase in capacity from 99,000 to 105,000.

To help pay for the redevelopment, Bartomeu and his board are proposing to sell naming rights to the sacred Nou Camp where there is a feeling that in order to compete with the rest of Europe's super rich clubs they need to be more commercially driven, despite taking in more than £400m a year in revenues.

The risk for a club so proud of its democratic ownership model is that the increasing commercialisation will jeopardise its core principles. Put simply, there is a danger they could sell their soul.

While they might have been forced to go public on the Neymar deal, the very fact they set out the full details tells you their image and integrity still matter to the people in charge of Barcelona.

But they also know that the Barca brand has been damaged and that they need to work hard to restore the club's glittering reputation.