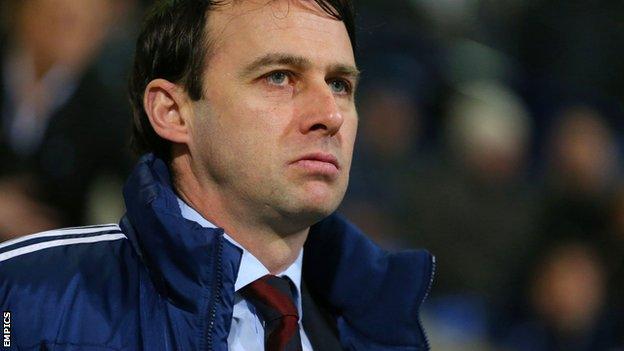 Captain Zat Knight believes Bolton were right to keep faith with manager Dougie Freedman during a difficult spell of results earlier in the season.

Wanderers were hovering above the Championship's drop zone before taking 10 points from their last four games, including Saturday's 5-1 win at Leeds.

"A few months ago a few managers got sacked, but the chairman and the board have stuck with him," said Knight.

"He puts 11 players on the pitch and sometimes I feel we've let him down."

The 33-year-old centre-back, who scored his first goal since September 2010 at Elland Road, told BBC Radio Manchester: "Hopefully we can repay him and the fans for sticking with us and have a good finish."

Freedman, 39, has been under pressure from Bolton fans at various points this season, particularly during a run of seven league games without a win from the turn of the year.

"Over the past couple of months, we've been playing really well," said the Scot, who has been in charge at the Reebok Stadium since October 2012 and guided Bolton to seventh position last term.

"This result has been coming. The fans are starting to see a young manager with younger players playing a certain way and getting results in a certain fashion."