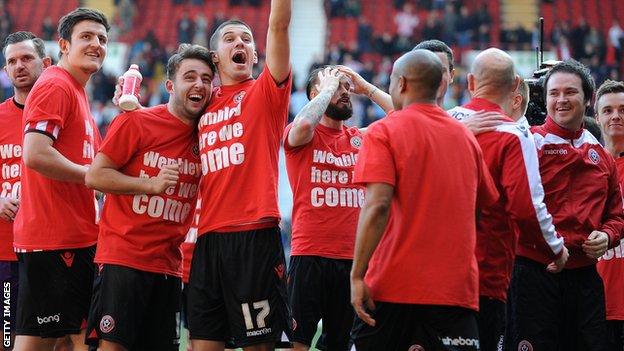 Captain Michael Doyle hopes Sheffield United's FA Cup success can spur the team on to return to the Premier League.

A ninth successive win saw the League One side beat Championship Charlton Athletic 2-0 on Sunday to set up a Wembley semi-final against Hull City.

Doyle told BBC Radio Sheffield: "I want to be part of this club going up the levels and I feel we can do it.

"There's a group of us who love playing here and want to be successful."

The midfielder, whose side currently sit 11th in the third tier, continued: "All credit to the manager and the staff, they've galvanised us, brought in players who have made us better, and we're getting the results.

"I've been questioned at times, and I give absolutely everything whether I'm wearing the armband or not, but it's not about me, it's about my team-mates and the staff and the supporters.

"It's a massive club because of the support, and to take it to Wembley for an FA Cup semi-final is unbelievable.

"At the start of the season we were bottom of the league and look where we are now, reaching for the stars. We just want the season to keep going, so it's on to the next league match against Carlisle [on Wednesday] and let's win that and see where we go."

United's run of victories has seen them rise from the League One relegation zone to nine points short of a play-off place, but with a game in hand on Peterborough in sixth.

And manager Nigel Clough said realistically the Cup run should make them stronger next season.

"We'll try and keep the run going but the league is still out of our hands," the 47-year-old said.

"Financially, reaching the semi-final sets us up for next season - I don't know the exact figures, but as a League One club it's a big boost, hopefully we can hang on to players and get a few more.

"The remit when I came here was to stay up and build a side to challenge for next season, so this is all a huge bonus. For League One players getting to Wembley is very special - a lot of these lads haven't been before and may never go again, so we're going to enjoy it."