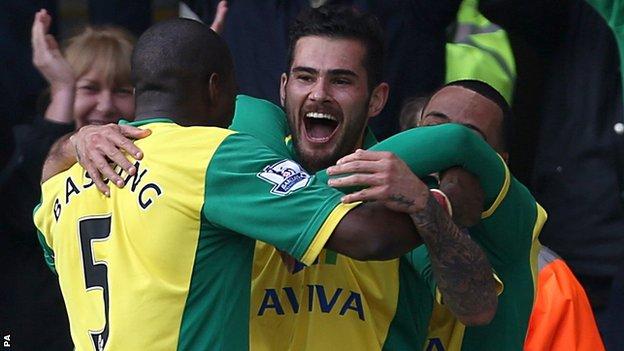 Norwich City midfielder Bradley Johnson has urged his side to improve their performances against relegation rivals.

Saturday's draw with Stoke followed defeats by Aston Villa and West Ham and a win over Tottenham.

"That's something we've been working on off the pitch. We can't just raise our game for the big teams."

Chris Hughton's side are four points above the relegation zone following the 1-1 draw at the weekend, with Johnson scoring the opener, only for Jonathan Walters to equalise from the penalty spot before being sent off.

Four of Norwich's last five points have come against top-five teams, with the win over Spurs and a draw against Manchester City, but scoring goals is their main concern, with just five from their last nine games.

Only Crystal Palace have scored fewer in the top flight this season.

Saturday proved to be another frustrating day for record signing Ricky van Wolfswinkel, with the Netherlands international having gone 20 games since his only goal for the club.

"There is no doubt he is working hard enough for the team," said Hughton.

"It's a combination of a few things. It's us making sure we're providing the opportunities for him to score.

"It's perhaps that little lack of confidence from the lad as well, adjusting to this division."