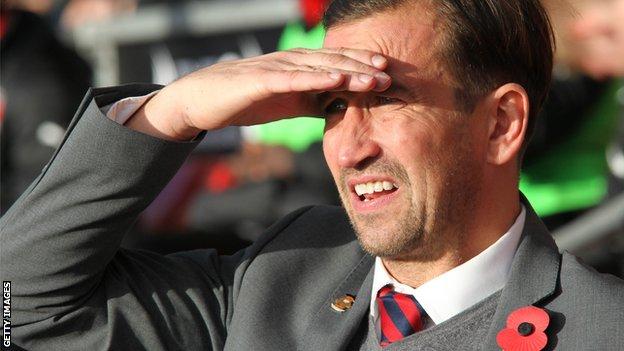 Newport manager Justin Edinburgh says his players are "playing for their places" when they face Morecambe in League Two on Tuesday.

The 2-1 loss to Mansfield Town on Saturday left County with only one win from their last 12 matches, and Edinburgh has warned his players they need to improve.

"People are playing for their places," he said.

"They've got to step up and make sure they're here for next season."

Newport are a point ahead of Tuesday's opponents in the league, but face a much tougher schedule following a string of postponements.

But the Exiles manager sees a benefit to the fixture congestion.

"The good thing for us is we've got games coming thick and fast," he said.

"We've got to concentrate on getting a little bit of consistency, some form."

County's credentials as play-off candidates on their first season back in the Football League have been dented by their loss of form.

And former Tottenham star Edinburgh has warned his players that poor performances will be punished.

"If anyone [lets their head drop] they won't be in the team," he added.

"People have got to make the most out of opportunities that come their way.

"There's plenty of people playing for their places."

Despite their recent form, Newport remain six points away from a play-off spot with two games in hand.

But the County manager would not be drawn on their promotion chances.

"We've got to concentrate on trying to get a run of form together," said Edinburgh.