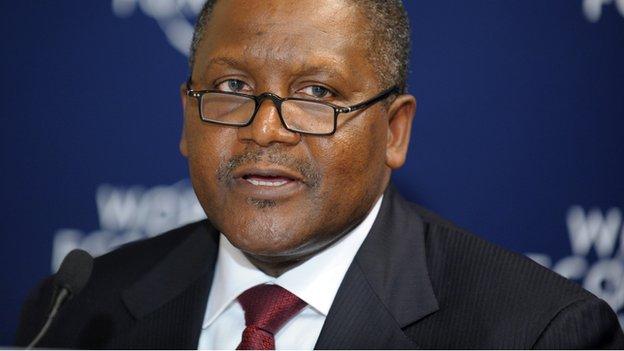 Africa's wealthiest businessman Aliko Dangote is set to fulfil his promise to reward Nigeria's team with $1m for winning the 2013 Africa Cup of Nations.

After a public appeal by Super Eagles captain Vincent Enyeama, it seems Dangote is about to come good.

He told BBC Sport: "We've been waiting for Nigerian officials to collect the money but nobody has written to us.

"We will write to them, asking for the account numbers of the players, then we'll make the transfer immediately."

Dangote, who is group president and chief executive officer of the Dangote Group, is reputed to be Africa's richest man.

Earlier this month he became the first African to be listed in the top 25 of Forbes magazine's annual ranking of global billionaires, with a net worth of $25bn.

His wealth has been accumulated from a business empire that he founded in 1977 and now includes the number one sugar production company in Nigeria, a cement factory and textile products.

Dangote added that "the money was promised through the presidency [during a state dinner last February]" and he had been waiting to be approached about the pledge.

The delay led to a public appeal by Nigeria goalkeeper Enyeama, who said: "It was just a reminder to patriots who are very busy and may not have been prompted after they made their pledges.

"The players are determined to bring more honours to fatherland at the forthcoming World Cup."

Enyeama was full of praise for Cross River State governor Liyel Imoke for following through with his promise to give members of Super Eagles one plot of land each in the state capital, Calabar.

Last week, Nigerian Football Federation president Aminu Maigari delivered the land papers from government house in Calabar to team administrator Dayo Enebi Achor, who has since commenced their distribution to all the players and officials.

Meanwhile, the Nigerian Football Federation has proposed to parliament that lawmakers approve a 1.2 billion-naira ($7.2m) war chest for the Super Eagles' bid to become the first African winners of the World Cup.

It would mean each player would pocket $10,000 for every group stage victory, according to the budget, which was submitted on Monday.

In addition, every one of the 23-man squad will get a daily allowance of $200, taking the potential total amount of win bonuses and allowances for the 32-day competition to $2.6m.

The remaining cash will go towards the fees of coaches and backroom staff, the cost of accommodation, business class air travel and the team's training camps in both the United States and Brazil.