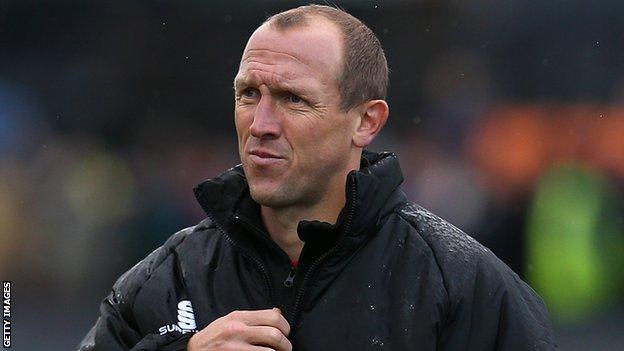 Barr has been in temporary charge of the Conference Premier side following Morrell's departure, including Tuesday's

"I hope Billy gets it to be fair," Morrell told BBC Radio Wales Sport.

"If it's not going to be Billy, maybe somebody with a completely fresh pair of eyes that hasn't seen Wrexham for a long time.

"There's a lot of managers that are out of work at the moment and it's a very, very good job for somebody going in and it's in a really good position."

In Barr's four games in charge Wrexham were beaten 5-0 by Luton, won 2-0 at Hereford, drew 0-0 at home to Kidderminster Harriers and then lost at Braintree.

Barr believes he has the support of Wrexham players in his bid to become the club's permanent boss.

Morrell, who was in his second spell at Wrexham, had been in charge at the Racecourse for two and a half years after succeeding Dean Saunders.

Although disappointed to leave, Morrell felt it was the right time to step aside following a disappointing season in which the Dragons failed to mount a push for promotion.

"I never really wanted to leave. It's such a great club and really close to my heart," Morrell added.

"It was a disappointment when I finally made the decision, but I have to say looking back I still think I made the right decision.

"I just felt that things had been very tough this year. I've left the place in a really good place I think.

"I think the new manager, whoever it will be, has got a good club, a debt-free club and one he can take forward."

Morrell has joined Shrewsbury Town until the end of the season as assistant manager to former Blackpool team-mate Mike Jackson.

The former Blackpool and Coventry striker was keen to make an immediate return to football and to gain further coaching experience.

"It's a little bit different to what I'm used to," Morrell said.

"It's an opportunity, another string to my bow going in as a number two to see if I like that more than managing.

"It is only for eight weeks and I didn't feel there was anything to lose really by going in and trying to help a good friend of mine and try and keep them in the league."