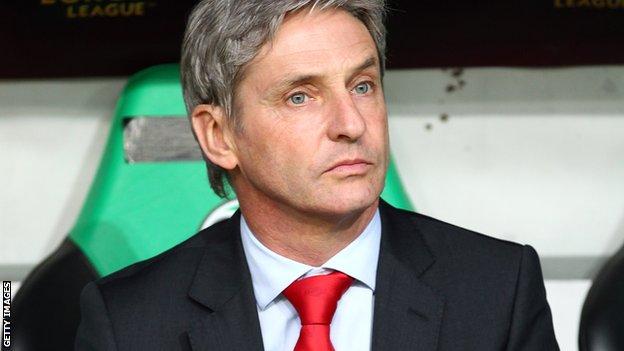 Charlton Athletic have sacked manager Chris Powell with the club bottom of the Championship and have replaced him with ex-Standard Liege boss Jose Riga.

Powell, 44, had been in talks with new owner Roland Duchatelet over a contract extension, but they have not agreed on a number of key issues in recent weeks.

Riga, 56, had been technical director of AC Milan's academy and is known to Duchatelet, who also owns Standard.

He will take charge for the first time against Huddersfield on Wednesday.

Belgian businessman Duchatelet, who also has links to four other European clubs, took over the Addicks at the start of January.

Duchatelet said there had been "good progress" in talks over a new deal for Powell but that the two parties "could not reach an agreement over the club's football strategy going forward".

Five of Charlton's six signings in January came from Duchatelet's other clubs, while they sold striker Yann Kermorgant and midfielder Dale Stephens to Championship rivals Bournemouth and Brighton respectively.

"The situation put a strain on the working relationship between Chris and the board," 67-year-old Duchatelet said in a statement on the Charlton website.

"Therefore I think it is best for all parties that we part ways at this stage."

Powell's last game in charge was Sunday's FA Cup quarter-final against League One Sheffield United, but they were defeated at Bramall Lane.

Charlton have only won six of their 30 league games this season but, despite being adrift at the foot of the table, have four games in hand on Millwall, who are in 21st place.

"Given the club's position in the league and the number of important fixtures upcoming, I felt this difficult decision was unavoidable at this time," Duchatelet added.

"We will look to quickly appoint a replacement who we feel will give us the best chance of avoiding relegation from the Championship.

"I can assure supporters this was not an easy decision, but it has been made with the club's future in mind. Time will tell if it is the right decision."

Former England full-back Powell was appointed Charlton manager in January 2011 on a three-and-half-year contract, having made over 250 appearances for the club in three spells during his playing career.

He led Charlton to the League One title in 2011-12, and last season guided them to ninth place in the Championship, just four points short of a play-off place.

Powell was the ninth longest-serving manager in the Premier League and Football League and his departure leaves Norwich City's Chris Hughton as the only black or mixed race manager in England's top four divisions.

Riga, who has managed several sides in Belgium including RAEC Mons and Standard, will be assisted by Karel Fraeye, who had been head coach at Belgian club Eenddracht Zele and also has links with Charlton's owner.