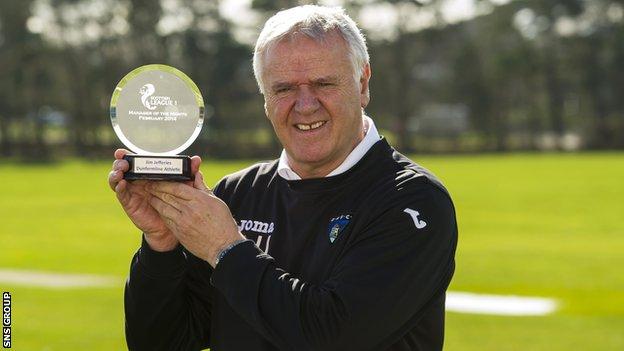 Dunfermline's Jim Jefferies is the SPFL League One Manager of the Month award for February.

"It's a nice award to get but it's due to the efforts of everybody; not just the players on the park but the back room staff as well," said Jefferies.

Talking to the club website, he added: "You just have to accept these things on behalf of everybody."

March has not been so kind to the Pars, with Jefferies' side losing to Stranraer and drawing 0-0 at home to Stenhousemuir.

And the Fifers look like losing defender Callum Morris at the end of the season.

Andy Geggan and Josh Falkingham recently agreed extended deals but the 24-year-old centre-half has rejected the offer of new terms.