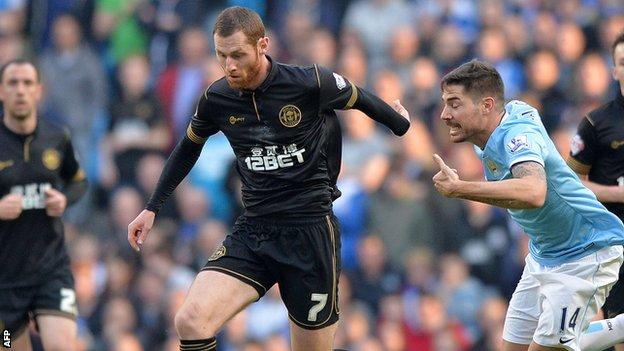 Wigan Athletic midfielder Chris McCann is likely to miss the rest of the season after suffering a multiple fracture of his right knee cap.

The 26-year-old was hurt in a collision with Micah Richards during Wigan's surprise 2-1 win at Manchester City in Sunday's FA Cup quarter-final.

"We will do everything to make sure Chris gets back to action as quickly as possible," said manager Uwe Rosler.

Meanwhile, Shaun Maloney is close to a return from a long-term hip injury.

The Scotland international, who has not played for the Latics since September, will feature for the club's development squad against Morecambe on Wednesday.

"It's a massive blow for us and for Chris, especially coming so soon after the injury to Ben Watson [who suffered a broken leg last month]," Rosler told the club website.

Wigan, the FA Cup holders, will play Arsenal in their semi-final at Wembley on Saturday, 12 April, while they continue their bid for promotion back to the Premier League on Wednesday, when Sheffield Wednesday are the visitors to the DW Stadium.