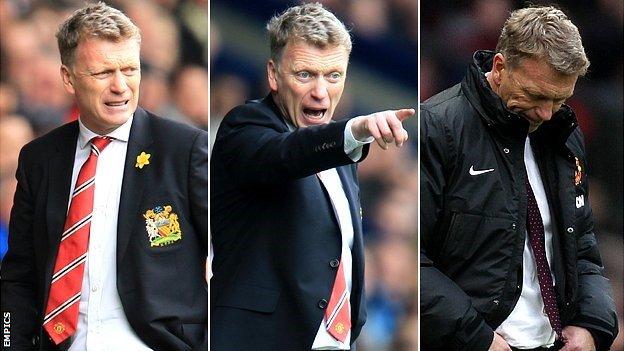 Is David Moyes out of his depth at Manchester United? Do his behaviour and body language betray a man unfitted to the pressures of managing a club of such size and prestige?

Some Old Trafford fans, seeing their side 18 points off the top of the table, will have formed their own conclusions.

But one man who really knows him is performance psychologist Michael Finnigan, who worked with the Scot at Preston and Everton, helping him to handle the pressures of management.

As United enter a crucial 10-day period that includes a Manchester derby, the second leg of their Champions League clash with Olympiakos and the visit of old enemy Liverpool on Sunday, Finnigan draws on his knowledge of Moyes to explain what makes him tick and what he thinks club and manager need to do now to show that the former Everton boss was the right man to succeed Sir Alex Ferguson.

Moyes was never going to be an instant success

"I know David Moyes. I have not changed my mind about him one bit. He is absolutely awesome. But he is not the kind of guy you can just drop into a situation and expect him to grasp it all instantly.

"You have to give him time to get his arms around it and really understand it. That is who he is. Your due diligence would tell you that.

"I am pretty sure Everton chairman Bill Kenwright would say the first couple of years at Goodison Park were not easy for Moyes because he was getting used to everything.

"If I was advising the people at United who appointed Moyes, I would have said 12 months ago: 'Are we sure we have the right person? Do we really understand why we are appointing this guy? What is the realistic/optimistic/pessimistic assessment of how this is going to go and do we have a plan for each of those situations? Please tell me that, as a board of a multi-billion dollar company, you have thought about all these scenarios and have a plan for each one.'

"If they can't deal with that, don't give him the job. These guys are paid big money to have strategic foresight.

Moyes must stick to his beliefs

"This is Manchester United. The amplification of your actions is massive. The reality is that everything you do is going to be scrutinised.

"It is all very well being yourself at Everton, but at Manchester United it is much more difficult.

"You can start thinking about what will happen to the share price if you don't win this game, or that two million people are about to hit Twitter if you lose that one. You can stop being yourself and start doing what you think you should do, rather than doing what you are being paid for.

"I know him well enough to know he will be fine if he just does that. He is good enough to be there and deserves to be there."

"At times like this, you need the leaders to be strong, to stand up and be counted. Moyes must be absolutely clear that, no matter what kinks appear, he is not going to be diverted from his path.

Michael Finnigan - the man who has helped Moyes

"These situations become a real test of leadership, character and faith in where you think you are going. You can't be running these big organisations and changing direction every five minutes. People don't respond well to it. People respond well to certainty.

"Leadership has to seep into everything you do - the way you drive into the car park, the way you walk through the restaurant when we are all eating our lunch. It is an understanding that leadership is every action, every word, every behaviour that we see.

"It has to be everything, from the way the kit is laid out, to the way the pitch is prepared, to how we walk through the changing room. It is the same for the team talks and the news conferences.

"You can't put a sticking plaster on the situation. You can't be having negative thoughts but pretend everything is all right. It has to pervade your whole thinking.

"What you and I see has to be a natural outpouring of what is happening on the inside. It is not something tactical, it is something that runs through the whole of your day."

"You have a person adapting to a totally new situation. You could argue it is the highest-profile sporting situation in the world right now.

"There is loads of stuff that former boss Sir Alex Ferguson, former chief executive David Gill, the Glazer family who own the club and current chief executive Ed Woodward can do.

"You are looking at those experienced leaders to help him take control. There are loads of things they can do in terms of conversations, their dealings with the media, the way they behave when they are in the stand, both directly and indirectly, that can send out that message.

"I would do a little reassessment of where we are going to be in three or five years' time. I would make sure that we all clearly understand it, we all see it the same way and we are all agreed upon it.

"I would be having conversations with those people, telling them: 'Every time you are in public anywhere, stick true to that set of behaviours we have designed.'

"The point about these people is that they should be naturally tuned into that anyway. It is not like you are asking a man in the street to suddenly start behaving like a leader. You are asking people who have been there for years, just for a little while, to really tune in and appreciate the importance and subtlety of their behaviour.

"Ferguson has done not giving the journalists any moments to see him in the stand with his head in his hands. I want to see more of that and I want an appreciation from them that there needs to be more of that."

This is no time for negative thoughts

"There is a temptation to say: 'If these next few games don't go well, what will happen?' It is easy to get into that negative spiral.

11 - Points behind Liverpool from the same number of games

"Instead, you have to say: 'This is where we are going to be at the end of the season and there is no question about it. Then we can plan for next season.'

"David has to stay positive about his direction. Things haven't gone as well as he would have liked, but so what? I am not interested in that.

"I am interested in his next match, next decision and his thinking about the next three months. He has to stay committed.

"That is an awful lot harder than it sounds when all around you it feels like it is caving in.

"In the book by Sir Clive Woodward, England's rugby union World Cup-winning coach, there is one phrase that is particularly striking: 'Winning doesn't happen in a straight line'.

"You might win 10 games on the bounce, then you lose two. You go above and below the line. As leaders, we pay you to work out the strategy of where we are going and make sure we stick to it."

United must stand by their man

"I don't think they have any other option. They can't change horses in mid-stream because the first one is not doing very well. It would contradict everything the Manchester United brand is supposed to stand for."