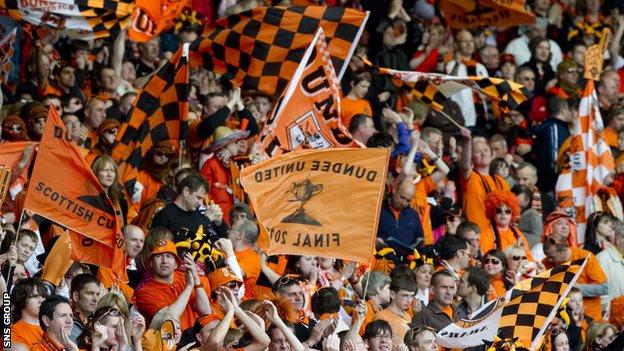 Dundee United plan to ask for up to 20,000 tickets for their Scottish Cup semi-final at Ibrox Stadium in April.

The Taysiders will meet the winners of next Monday's Albion Rovers versus Rangers quarter-final replay.

United took 27,000 fans to the Scottish Cup final in 2010 when they beat Ross County at Hampden Park.

Meanwhile, Arab Trust board member Mike Barile says that, if Rangers do make the last four, the game should not be played on the Glasgow side's ground.

The former chairman of the fans' group said: "I was active in the supporters movement when United and Dundee met in the Scottish Cup semi-final in 1987.

"Both clubs were prepared to play the game at Tannadice or Dens Park on the toss of a coin, but the SFA insisted that the game had to be played at a neutral stadium.

"Now there is the possibility of playing Rangers and it is okay for the game to be played at Ibrox.

"Can you imagine the outcry if the SFA were to say the game was to be played at Tannadice? It is a ridiculous decision.

"If it is to be Rangers we are to play then the game should be played at a neutral ground."

When Celtic Park was chosen as the venue for the final in October, it was announced that both semi-finals would be played at Ibrox.

Hampden Park is unavailable because of redevelopment work taking place to lay track for the Commonwealth Games.

United knocked Rangers out of the Scottish Cup last season, winning 3-0 on what was manager Jackie McNamara's debut in the Tannadice dugout.