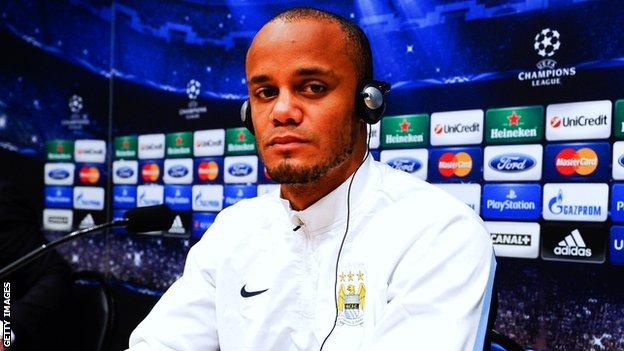 Vincent Kompany says Manchester City can take encouragement from their 2012 Premier League title as they look to recover a 2-0 deficit in Barcelona.

The captain thinks City can be inspired by the 3-2 final-day win over QPR when they face the Catalans in the Champions League last 16 at the Nou Camp.

City scored twice in stoppage time against QPR to beat Manchester United to the title on goal difference.

"Football is made out of nights like this," defender Kompany said.

Barcelona have gone through on 32 of the 34 times they have won the first away leg in a European tie. They let a two-goal advantage slip when they were knocked out of the European Cup Winners' Cup first round by Metz in 1984-85.

"If anything should give you belief then it should be that day against QPR."

City trail 2-0 from the first leg tie at the Etihad three weeks ago when a Lionel Messi penalty and a late strike from Dani Alves put Barca in command.

No team has ever come back from losing a first leg by two goals at home in the Champions League era, but Gerardo Martino's side have suffered two defeats, by Real Sociedad and Valladolid, in three La Liga games since the first leg at the Etihad Stadium on 18 February.

Kompany says City are capable of getting the result they need at the Nou Camp and progressing to the quarter-finals.

"It's in our own hands and that's the good thing, so I guess the message to everyone is that we have to believe," Kompany said.

"I'm actually very excited about this one. I think the whole team is.

"If everything goes well, we're capable of hurting Barcelona, so that's what I want to focus on.

"I like to focus on my strikers because I know that if they score we have a chance, but everyone needs to be at their best."

Manchester City defender Martin Demichelis is suspended after his red card in the first-leg defeat.

City centre-back Matija Nastasic is missing with a knee injury and striker Stevan Jovetic is absent with a hamstring problem.