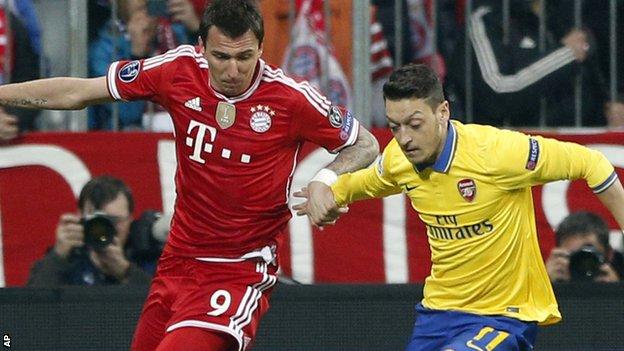 Arsenal midfielder Mesut Ozil is facing "at least a few weeks" out after injuring his hamstring in Tuesday's Champions League exit at Bayern Munich.

The 25-year-old was withdrawn at half-time in Arsenal's 1-1 draw in Munich, which saw them lose 3-1 on aggregate.

He is a great player and a very good diver

Ozil, who signed for the Gunners from Real Madrid for £42.4m, will have a scan on Wednesday.

Bayern progressed to the quarter-finals of the competition, leaving Arsenal with just two more chances to end their nine-year trophy drought this season.

The Gunners are seven points behind Premier League leaders Chelsea and will play Wigan in an FA Cup semi-final.

Arsenal will be hoping Ozil's injury is not too serious, having already lost England midfielder Jack Wilshere for at least six weeks with a foot injury.

"We have to make a scan tomorrow to see how bad it is but he is out for at least a few weeks," said Wenger.

Robben also earned a penalty in Tuesday's second leg and, despite both spot kicks being missed, Wenger repeated his criticisms of the Netherlands winger.

He said: "Robben is very good at getting the maximum of nothing. He is a great player and a very good diver.

"He is a fantastic player, I would not deny that, he's one of the best players in the world.

"But he gets in front of a player and then he slows down and goes down. He gets the free-kicks."

Robben though was adamant both penalties were the correct decisions.

"If you lose, don't start complaining about silly things," he said. "It was two penalties. I don't want to defend myself. From a big manager, you expect a little bit more if you lose."

Bayern are bidding to become the the first team to successfully defend their Champions League title, after beating Borussia Dortmund in the final last season.

"The players were very intelligent, the way we played. We wanted to control the game," said Bayern boss Pep Guardiola.

"In the first half we only had one chance but we didn't give them any chances, so we played very well in that aspect and we wanted to put a bit more pressure up front."