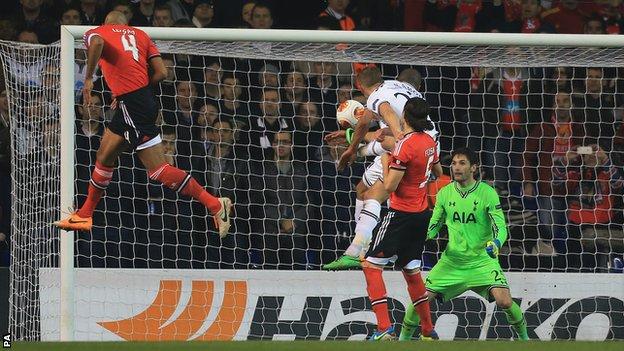 Tottenham will need to overturn a two-goal deficit if they are to reach the Europa League quarter-finals after losing to Benfica in the first leg of their last-16 tie at White Hart Lane.

Former Bolton forward Rodrigo scored the opener for the Portuguese side with a neat finish low past Hugo Lloris.

Emmanuel Adebayor dragged an effort wide in the second half.

But Luisao struck twice for Benfica, either side of a superb Christian Eriksen free-kick.

Benfica, who lost 2-1 to Chelsea in last season's final, will now be favourites to progress as they head into the second leg in Lisbon next Thursday with three away goals to their name.

Since winning the European Cup in 1962, Benfica have lost in seven continental finals, most recently against Chelsea in last season's Europa League

The Portuguese league leaders went into the tie in superb form, unbeaten in all competitions since November after a run of 21 wins in 23 games, and showcased an expert European away performance.

Spurs manager Tim Sherwood had warned that a lot of his players were playing for their futures, having been thrashed 4-0 by Chelsea in the Premier League on Saturday, and they responded with hard work and endeavour.

However, they were undone by the visiting side's organised approach, and by two goals from set-pieces.

The north London side had started the match on the front foot, applying early pressure on the opposition backline that had conceded just one goal in 16 previous matches. Sandro struck an effort over the bar from outside the box as they threatened their visitors.

But it was Benfica who broke the deadlock with their first meaningful attack of the match. Ruben Amorim slid a ball through to Rodrigo, who kept his composure to tuck in a low side-footed finish.

Tottenham, who were unbeaten in their last 11 European games at home, came out in the second half and almost restored parity as Dane Eriksen's neat through ball found Adebayor, but the former Arsenal man was unable to find the target.

Benfica got the better of Bill Nicholson's Tottenham in the semi-final of the 1961-62 European Cup on the way to beating Real Madrid in the final.

The away side grabbed their second when young striker Harry Kane was caught in possession before Lloris spared further punishment by tipping Amorim's shot over the bar.

From the resulting corner, though, Luisao found himself free in the six-yard box and powered home a header.

Eriksen curled in a wonderful free-kick from the edge of the area to reduce the arrears.

However, Luisao smashed home his second late on following a free-kick to leave Jorge Jesus' men in-charge of the tie.

The Benfica boss waved three fingers in celebration to the Tottenham bench after the last goal, with the two managers failing to shake hands at the final whistle.