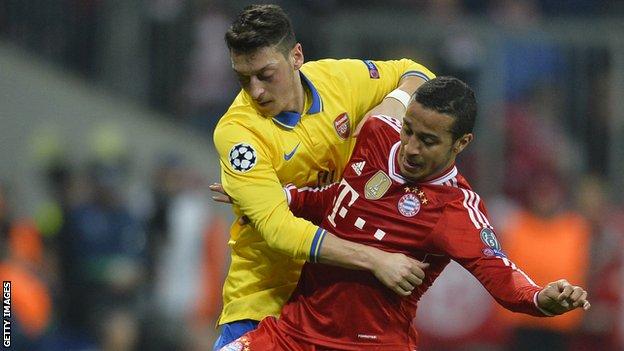 Mesut Ozil's hamstring strain will keep him sidelined for at least four weeks, scans have revealed.

The Arsenal midfielder, 25, was injured in the second minute of Tuesday's Champions League exit at Bayern Munich but played on until half-time.

The club's £42.4m record signing will miss Sunday's trip to Tottenham, as well as games against Chelsea, Swansea, Manchester City and Everton.

He is also doubtful for the FA Cup semi-final against Wigan on 12 April.

Arsenal then travel to Hull on 19 April, with fixtures against Newcastle, West Bromwich Albion and Norwich - plus the yet-to-be-rearranged visit of West Ham and a possible FA Cup final - to follow before the end of the season.

Ozil has scored six goals in 35 appearances since joining Arsenal from Real Madrid.

He had already played twice for the Spanish club this season before his move to London and has figured seven times for his country during the campaign.

Meanwhile, Gunners boss Arsene Wenger says midfielder Kim Kallstrom could make his debut against Tottenham after recovering from a back injury that has kept him out since arriving on loan from Spartak Moscow.

The Welshman limped off at West Ham on 26 December with a thigh problem and was in line for a comeback at White Hart Lane, but Wenger said: "We have had to defer his comeback to full training a little so he is not available.

"He is having difficulties in the final stages of his rehab. It looks to be short term."