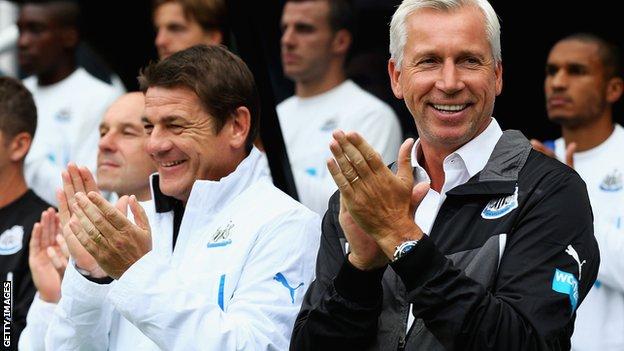 Pardew is suspended from pitchside for seven matches for a headbutt on Hull City midfielder David Meyler.

"John's very experienced having done it all before and I'm sure he will be well briefed," Harper told BBC Newcastle.

Pardew was appointed Magpies boss in 2010 and after a month-long search, settled on Carver as his right-hand man.

Between his stints on Tyneside, the Newcastle-born coach has been on the backroom staff at Leeds United, Luton Town, Plymouth Argyle and Sheffield United.

In 2009, he resigned after one season as head coach of Major League Soccer side Toronto FC and that remains his only managerial role apart from caretaker spells in charge of Newcastle, Leeds and Sheffield United.

"Alan's punishment is about par, I think it could have been a little bit worse," said Hull keeper Harper, who worked with Carver for seven of his 20 seasons at St James'.

"John obviously knows the club inside-out and whether as a full-time manager or caretaker, he understands what to do in that role too.

"Now it's time for Newcastle to look forward. I hope it goes well this weekend [away at Fulham], both with my Newcastle and Hull caps on."