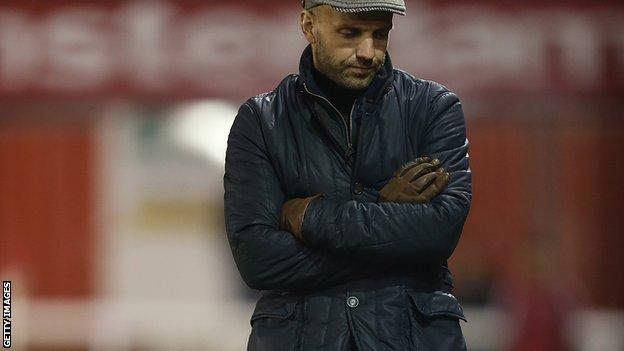 Exeter boss Paul Tisdale says his side have got to show real character to halt their slide down the table.

The Grecians lost 1-0 to fellow strugglers Northampton on Tuesday to slump to 22nd in League Two.

"It was a very disappointing night and the table doesn't look great but we've got to keep our nerve," Tisdale told BBC Radio Devon.

"It's my job on the training ground and in the dressing room to make sure we keep doing the best we can."

Exeter's freefall down the table has largely been a result of their dismal home form, with their last victory in front of their own fans coming on 5 October against local rivals Plymouth Argyle.

But since then, Exeter - who had been as high as third in the table earlier in the season - have gone 13 games without a win at St James' Park and have scored just six goals in the process.

"We have to deal with the nerves better than we did in that last period," said Tisdale, who is the longest-serving manager in the Football League having taken over at the club in June 2006.

"There's not much I can say from the bench - they have to make those decisions but we didn't pass it enough. It's tough but we have to get the first goal and keep a clean sheet. There's some basics we have to do.

"The way the players started the game, I'm confident they can get themselves into these games but it's about scoring more than you concede and we didn't do that.

"It's disappointing but as much as it looks dire, we have to remain upbeat and do our very best. We can't give in to it and have to keep going.

"I thought the first half an hour was as good as we've been this year. I thought the team was excellent other than creating chances.

"The problem is if you don't put the ball in the right areas or put pressure on the goal then you're not going to score goals.

"We missed a golden chance with David Wheeler in the first 20 minutes. But for the first half an hour we looked strong and competent and they looked very nervous, that was completely different to the last half an hour."