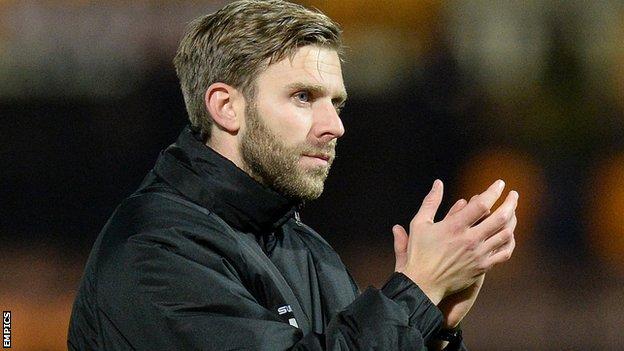 Salisbury City manager Mikey Harris has said Tuesday's 4-0 defeat by Forest Green was the most "difficult" game of his tenure so far.

The Whites are three points off the Conference play-offs and held leaders Luton to a 0-0 draw on Saturday.

But three days later they were thrashed by Forest Green - who sit two places behind them in the table.

"It was my most difficult evening since I took the job," Harris, who was appointed in July, told BBC Wiltshire.

"I'd like to apologise to the fans that came here. I'm sure, like me, they came here with high hopes after a great performance [against Luton].

"Anyone who witnessed the game on Saturday would have expected more, and I expect more. I've got better players than that, but they didn't show it.

"What's the point in me doing research on opposition teams all week if we're not going to take it on board?

"That's the most disappointing point for me, the fact that the work done in the week is just gone in a flash."

But they have picked up only two wins in their last eight matches and Harris has demanded improvement in their next game against Gateshead.

"We'll work hard on our analysis, we'll work on the training pitch and we'll recover properly," added the 29-year-old.

"We'll do whatever it takes to work hard and I want to make sure that, on Saturday, I get a reaction."