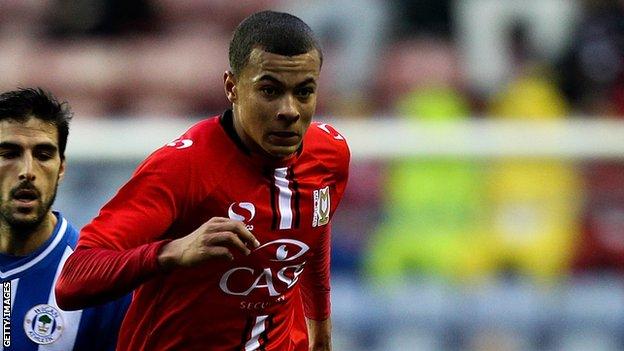 MK Dons boss Karl Robinson has said teenage midfielder Dele Alli is one of the best ever English youngsters.

The 17-year-old scored his first senior hat-trick in Tuesday's 3-1 win at Notts County in League One.

"The whole talking point is probably going to be about one of the most gifted 17-year-olds this country has ever seen."

Alli scored in his first MK start last season, an FA Cup replay victory over Cambridge City, and has seven goals in 35 games in total.

The England Under-18 and Under-17 international has reportedly been scouted by Liverpool, and Robinson has compared the academy product to a "young Steven Gerrard".

"I've said from the word go, he's as good as it gets and he's the best young player I've ever worked with," Robinson said after a win at Meadow Lane that took them to within three points of the play-offs.

"Dean Lewington [the club captain] said to me: 'The boy can be anything he wants'. I rested him for six weeks and that's now starting to help him.

"He's as confident as it gets. He held the match ball up to me today and smiled. You forget he is so young."